Seth found himself in unfamiliar waters

Seth looked down the road in front of him. It seemed to stretch off into nowhere.

I’m in the middle of nowhere — another city, another state, he thought.

While the long drive to Cal Farley’s Boys Ranch often draws this sort of reaction from young people coming to campus for the first time, Seth was actually right where he needed to be.

In a way, though, he was right about one thing: Cal Farley’s is a whole other world.

Seth grew up in Baton Rouge, La., and spent most of his time with his mother and her family after his parents’ divorce. He saw some of his extended family as overly controlling, and Seth coped with this by developing some disturbing habits, including lying and manipulating those around him.

From Seth’s perspective, life was as good as could be expected. His mother worked hard and there certainly were struggles, but he felt little in the way of demands on his time. 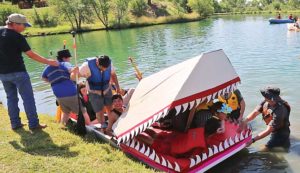 One day, Seth’s mother called him over to their computer. She was looking at a website, www.calfarley.org. Cal Farley’s, she said, was a place that could help Seth become the best young man he could be.

“Do you want to try this?” she asked.

Almost before he knew it, Seth was living at Boys Ranch, discovering all the opportunities for both learning and fun that surround him here.

One day, he shared a story with one of the adults in the dining hall, where Seth had chosen to participate in an Experiential Learning Program. Seth described how he and a friend had decided to get creative with some boxes one afternoon.

“My friend’s dad bought lots of duct tape,” he remembered. “We made spears, and we built these cardboard boats. My friend said, ‘I bet I can build one better than you.’ But, his sank so fast!”

Hmm … cardboard boats. Seth’s mentor, Campus Life Supervisor Judah Brown, wondered if he knew about Cal Farley’s tradition of building cardboard boats and launching them on one of the campus lakes each summer. (It’s something our Adventure-Based Services Team has hosted for the last decade.) He knew that Theresa Brown, a member of our food-service staff, was planning to build a boat with some of the young people on her team.

“We started probably a month before the competition. It was fun,” Seth said.

As the days crept closer to the July boat races, Seth enjoyed working with his peers and mentors on their boat. 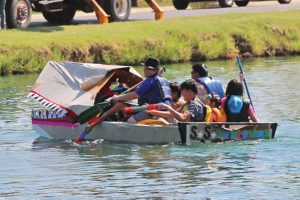 “Ms. Brown looked on the Internet for ideas,” Seth remembered. “She found this shark, and wanted to build that. The best part was seeing everyone get involved together. I got more attached to them than I’d ever been.”

When the day came for the boat races, Seth was amazed to see nearly 60 boats lined up next to the lake. Some were the work of individuals. Others represented the creativity of entire homes or groups of people.

One by one, each boat took its turn in the water. They paddled from one buoy to another, then along the shoreline, where the Boys Ranch Volunteer Fire Department provided some relief from the summer heat, courtesy of their fire hoses.

“It was hot. We got squirted with water — I feel like that guy with the water hose was after me, I’m telling you!” Seth laughed.

Seth and his friends came out of the water with smiles on their faces.

“Our boat did great,” he said. “It was funny when we were getting squirted with the water hose. It was lots of fun.”

A lot of fun, indeed. Seth enjoyed spending time with other youth working on their boat, and he looks forward to the possibility of building another next year.

“It would be really great. I’d probably make a giant fish, or something,” he said.

The boat races were a fun way to help Seth and his peers to connect through a shared activity. And, in the process, Seth discovered one of the keys to changing his life’s direction — relationships.

“It’s really just about spending time with people,” he said, “and just having fun with them.”

Click here to learn more about the history of this tradition:
The 11-year-history of an unusual idea

PrevJacoby: Growing in his faith to change
Emily: A tradition worth celebratingNext