Hands fly up into the air fast as questions and answers zip across the group of children gathered at the east end of the Dippel Activity Center at Cal Farley’s Boys Ranch. “The Rock Lady” is on campus to do a special activity called “Finding Gems, Minerals and Fossils” as part of the summer youth programming being offered.

“If you find a shiny, flat hard piece like this,” Lenda Ziegler told the kids, holding up a piece of flint, “chances are an Indian may have held it, touched it and even worked it to make an arrow or a spear!” 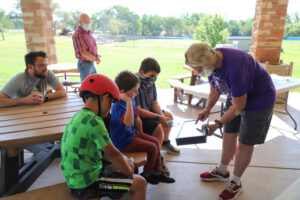 Squealing with excitement at the thought of holding the tool of an honest-to-goodness Comanche tribesman, the children are smitten with The Rock Lady already.

Ziegler, assisted by her husband of nearly 50 years, David, admits the couple are total rockhounds. They’ve collected rocks, gems and fossils from places near and far. She talks about her black-and-white zebra rock like it’s a good friend.

“We’ve just always had a love for rocks,” Ziegler said. She and David are members of the Golden Spread Gem, Mineral and Treasure Society in Amarillo, Texas. The couple has offered this kind of session to several youth groups. And, when given a chance, they partake in similar sifting events across the country, hoping to add to their personal collection.

The Zieglers have rocks they’ve found in riverbeds and during hikes on private land and special stones or gems friends have given them. She shows the children fossilized algae from Colorado and fossils gathered from the dry bed of Lake Whitney in Texas.

Lenda’s presentation is both entertaining and educational. She told the children about the various rocks on display, including details on how things like a conglomerate or a sedimentary rock is formed with water, pressure, heat and weight. And, she gives God credit for all of the work. 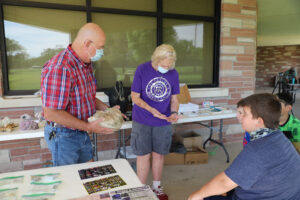 “Isn’t it amazing what God does in nature to make these beautiful things?” Lenda asks the children. She talks about how sunlight and water will change a rock.

“Acid in rain changes the color of rocks,” she said, which raises a few questions.

“You mean every single drop of rain is different?” inquired Ricky, 10.

Lenda explained clouds go through various things in the atmosphere as they move around the earth and, when they rain, different things come out of them as part of the raindrops. 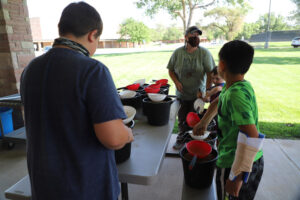 After her initial talk, it is time for the children to have some hands-on fun. Each child is given a large bucket of sand and a sifting tool. Inside each bucket is a combination of about a dozen gems, minerals and fossils. Each child is given a bag and directed to sift through the sand and find the treasures and save what they find.

Just for fun, some plain old rocks have also been hidden in each bucket, forcing the youngsters to figure out what’s what. More than 35 samples of gems, minerals and fossils are laying on a nearby table, serving as a key to what is in the buckets.

The sifting begins. The children work fast and furious! Lenda and David move around through the children sitting on the ground. They answer questions and offer help.

Robby, 12, is especially excited to participate in this program. 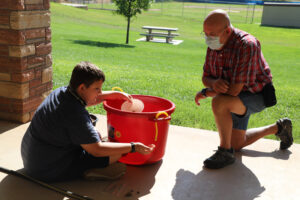 “I have always loved rocks,” he said.

Other than panning for gold at an old mine one time, he’s never really done anything quite like this before. To actually know what mineral or gem he’s finding is especially exciting.

“It’s a little hard for me,” Robby said. “I’m color blind, so I can’t see some of the colors, but I can look for fossils and for the glassy shine on the gems. I can see how the light goes through this garnet.”

He holds up a little red jewel in the rough.

“I found kyanite!” yells a voice across the way. 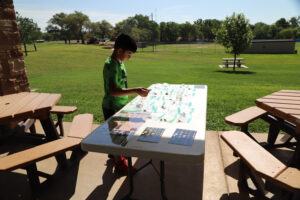 Ricky has been to the table with one of his finds and identified it. Within 10 minutes, he’s also hollering out that he’s found a tiger eye, a garnet, flint, topaz and obsidian.

“Look what I found!” said an excited Yuri as she holds up her bag. “I’m keeping these!”

Each child was allowed to choose five of the treasures they found in their bucket to take home and keep.

“Hang on to these special stones, because maybe you’ll be able to get them made into a necklace or something special,” Lenda instructed.

Whether the boys and girls create such jewelry in a future arts-and-crafts class sometime or simply hang on to them as a memory, it’s been an experience these young Boys Ranchers won’t soon forget!