Cal Farley’s Boys Ranch offers a large array of recreation and learning activities to the children it serves — even during summer!

Trinity Thornton, a distance learning coordinator and outreach educator for the Don Harrington Discovery Center in Amarillo, Texas, wowed children in the pre-adolescent community at Boys Ranch with her “Science Below Zero” show.

Thornton’s presentation was about the magic of liquid nitrogen. She made it both educational and entertaining for the children, helping them understand how cold liquid nitrogen is at minus 321 degrees Fahrenheit.

Thornton had wheeled in a big, round, blue tank of this magic potion. It sat by a table full of various items she said she planned to freeze. Among the items were metal, balloons, rubber and ping pong balls.

As she began asking the children questions regarding what they knew ─ or wanted to guess ─ about liquid nitrogen, the hands flew high in the air. The discussion was lively and fun!

After showing her audience how quickly various items freeze when placed in liquid nitrogen, she treated them to several experiments where she made white clouds poof high into the air inside the Boys Ranch Dippel Activity Center’s main gym. As she took a blown-up balloon and covered it with liquid nitrogen, it became a flat, crisp platter. Much to everyone’s surprise, she rattled the balloon a bit and it came back to life — full of air again! 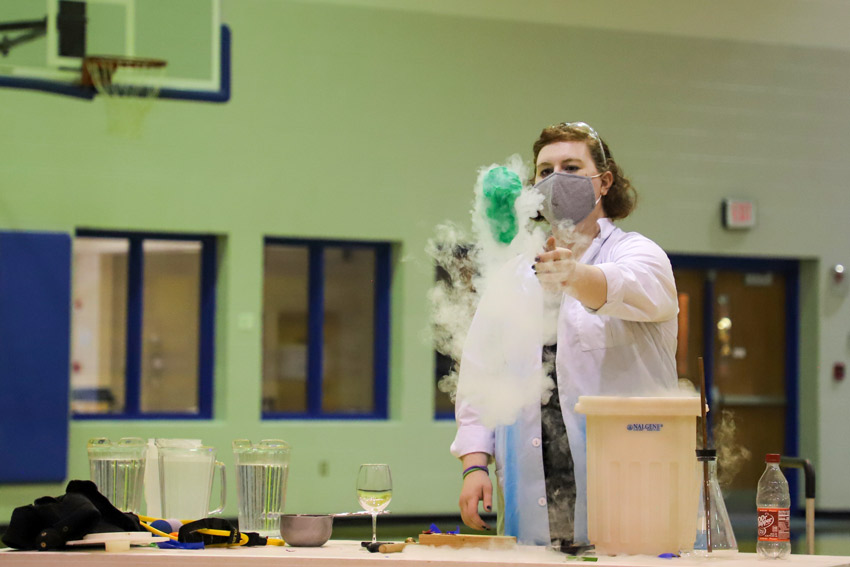 Thornton thrilled the kids when she went from big, to bigger to biggest with her experiments.

“You know about Texas … everything is bigger in Texas!” Thorton sold the kids.

Her finale was a large, 30-gallon plastic can that she filled with plastic balls in which she placed a small plastic bottle full of liquid nitrogen. When she tossed a pitcher of water into the large can, a short silence took place, followed by a huge boom that rocked the floor, tossing the balls high into the air and out across the gymnasium.

“I loved the presentation!” said Tracy Griffin, the primary house mother in Fischer Home. “It was totally science in a fun way! Trinity was animated and kept the kids guessing and reasoning.”

The boys in Griffin’s home were totally enthralled in the show, especially when they realized something might possibly blow up before it was over.

“I thought it was really cool,” said nine-year-old Riley.

Chase and Isaiah admitted that they were surprised at the explosion at the end and said they jumped a little bit in their seats when it went off.

“I really liked it, especially the explosion,” Isaiah said.

“It was fun to see what she did,” said Chase, referring to Thornton’s experiments.

According to Shelli Minor, director of youth activities at Boys Ranch, the Discovery Center has helped with the summer programming for a number of years now.

“Boys Ranch Independent School District is an educational partner to the Discovery Center and, as such, gets some free programming from them,” Minor said. “We wanted to keep the kids learning throughout the summer, so this is a perfect fit.”

“We were able to incorporate the experiences into our summer program, the ‘Sciences Live!’” Miner continued. “The Discovery Center comes out and does these great experiments, the kids learn something new — and it is so much fun!”