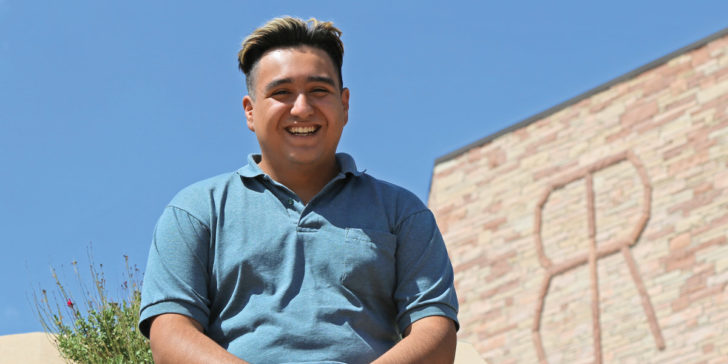 Armando eyed the tanned-leather boots inside their glass case. The bright blue of the shaft stood out, even 29 years after their creation.

When Armando came to Boys Ranch six years ago, he learned that a brand-new pair of Boys Ranch-branded cowboy boots were among the gifts our graduating seniors receive. But, he didn’t know why, and couldn’t appreciate the history behind the gift.

The newly minted high school senior has learned the boots are much more than a Western-themed gift. They’re a symbol of something far more important.

“It means that people care, and want to see us do well in our futures,” Armando explained.

At 18 years old and with the world at his fingertips, Armando knows his future can be whatever he makes of it. 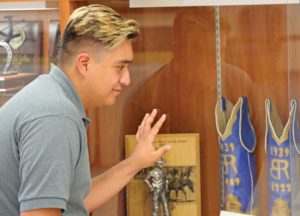 “I want to help kids who don’t have a lot, and are struggling,” he said, adding that it might be fun to utilize his love for music in that endeavor, too.

The hallmark spirit of community at Cal Farley’s helped cultivate Armando’s passion for helping others, showing him first-hand how caring people can empower others to change their lives.

When Armando was 7 years old, his parents divorced. A years-long shuffling game ensued, as he and his siblings bounced from one parent’s house to the other. When it became clear his mother faced some difficult personal struggles, Armando’s father won sole custody.

“I still pray for my mom every day,” Armando said.

The change brought much-needed stability to his life, but Armando had trouble reconciling his feelings.

Armando resented his mother for what he perceived as abandoning him. Yet, though angry and hurt, he remained fiercely loyal to her, creating an emotional rift between himself and his stepmother. In Armando’s view, his stepmother was trying to replace his mother. Armando kept her at arm’s length. In his young mind, anything else would be betraying his mother.

Over time, the stress of it all became too much. He started acting out — one day he’d feel fine, and the next he’d be angry at everyone. He got into fights with his peers and stole things from school. He began neglecting his schoolwork, sending his grades into a freefall.

“
They’re taking care of us.

Knowing he had to do something for his son, Armando’s father sent him to military school. But, the strict environment and rough-and-tumble peers there did little to improve Armando’s behavioral struggles. After two years away with nothing to show for it, Armando’s stepmother suggested a new solution.

One of her relatives had attended Cal Farley’s Boys Ranch. From the very first day, Armando knew this was going to be so much different from his experience at military school. Strangers went out of their way to be nice to him. His house parents took a clear interest in him, wanting to chat and make sure he was doing all right. Even his peers were friendly. 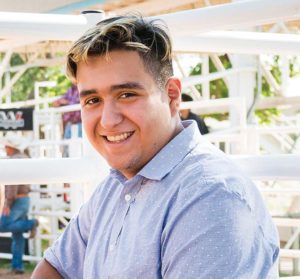 “My house parents always asked how my day was,” Armando remembered. “I didn’t really have a whole lot of friends back at home. I actually have friends now.”

The community around Armando expanded further when he began playing the clarinet in the marching band and joined the basketball team.

“After we win a game, we always hang out and talk about what we could have done better and what good things we did. Everyone gets to say what they want to say,” Armando said. “We’re like a family because we all help each other out. It’s a shared experience.”

As Armando enters his final year living at Boys Ranch, he sees how every word and action — from the first smile to those senior boots he’ll receive in his last days — shows the power of the caring hearts at Cal Farley’s.

“They’re taking care of us. They want to see us do well in life,” Armando said. “The people that care about you are your family.”

Click here to learn more about the history of this tradition:
Rogers offers tall boots to fill