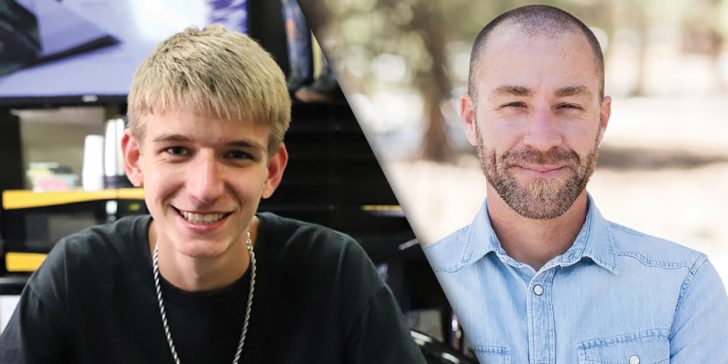 When Ryan arrived at Boys Ranch in 2010 at age 9, he measured in at 4’6” and weighed 54 pounds. He was tall for his age. Even back then, his thin build, long arms and large hands hinted at the size of man he might become.

Last month, after 9 years at Boys Ranch and now standing 6’2”, Ryan graduated from high school at Boys Ranch. He will venture on to college this fall on a track and cross-country scholarship. While he is academically solid, his running talent is what’s taking him places.

Ryan draws inspiration for his running from several places, including from Brian, a Boys Ranch alumnus and avid runner himself.

Brian, now 39, came to Boys Ranch from California. While he once thought wrestling was his favorite sport, Brian also tried cross-country running. Today, he is an ultra-runner sponsored by an international shoe and athletic wear company. He has completed 90 marathons and 50 ultramarathons. He has run all over the United States and in 2018, competed four times in European ultra-trail competitions. His list of winnings is impressive.

It certainly takes a tremendous athleticism to be able to run long distances, but equally important is the mental fortitude to be able to push through the physical exhaustion and pain that often accompany the cross-country sport.

Much of it centers around discipline. Ryan and Brian both credited Boys Ranch for instilling this quality within them.

“I learned a lot of discipline at Boys Ranch,” said Brian, who attended West Texas State University and earned a degree in biology once he left Boys Ranch. “I would have never learned discipline without (coaches) Paul and Susan Jones.”

Indeed, Brian said the Joneses were valuable mentors who continue to play an important role in his life.

For his part, Ryan said he’s also had excellent coaching, but it has been houseparents Rocky and Amy Lawless who have best helped him see his potential. He said they’ve helped him through hard situations involving the ‘Three G’s’ — God, girls and great-grandmother.

“They kept me from going crazy,” he smiled.

The Lawlesses plan to follow Ryan’s college career and stay connected with him into his adulthood. Rocky previously played sports for nearby South Plains College. He will be a great resource and help to Ryan as he adjusts to running at this higher level.

Despite the years separating them, both young men find running to be a time to refocus. Brian said he finds running his 100-mile races therapeutic because it connects him to his faith.

“Trail running is like church,” he said, matter of factly, “It’s the only time I can pray and meditate without life’s distractions.”

Ryan, on the other hand, said he draws inspiration to run from a place of redirected anger.

“My family doesn’t come from anything,” he explained. “We are good people, but no one does anything (productive) because of drugs, alcohol and violence. My mom is in prison, and I run because I know she can’t.”

Family is often a powerful motivator, both for current residents and Boys Ranch alumni. Brian, who now lives in Flagstaff and is a father of three girls, has enjoyed his professional running career. This year, he is taking a little well-earned downtime to focus on his life and family.

For now, Ryan is focused on his next run — college. Going on to run at the college level represents several things to him. He hopes to use scholarships he’s earned, including one from Boys Ranch, to help pay for an advanced degree in psychology or sociology. He’ll also be much closer to his great-grandmother, who is his biggest fan.

On the other end of his running career, Brian said his proudest moment happened close to Boys Ranch.

“My first 50-mile run was in the Palo Duro Canyon and I was happy to even have a finish there in over 9 hours,” he explained. “Seven years later, I got more competitive, came back to Palo Duro Canyon and ran the race, won it with a time very close to the course record and I’m very proud of that!”

Brian is still very tied to the Texas Panhandle and has visited his Boys Ranch home several times in his adulthood.

In following Brian’s footsteps, Ryan hopes to eventually have an opportunity to tell his childhood story to others.

“I think I’m going — no, I know I’m going to — when I get the chance, be an activist and public speaker to talk about mending things and fixing broken people.”