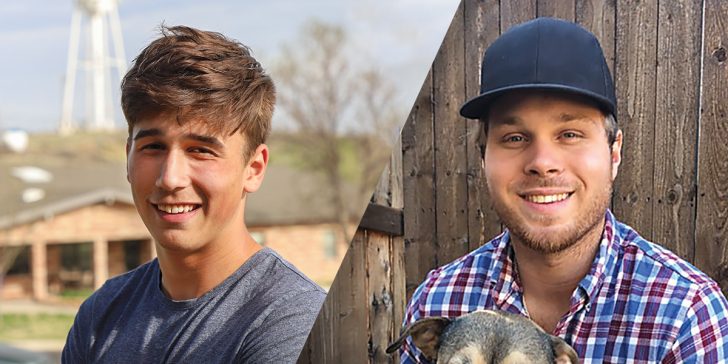 John Wesley, or J.W. for short, and Jabe do not know each other. Yet, for being strangers, their stories are intertwined with similarity.

Both desperate for change in their lives, these young men came to Boys Ranch almost exactly seven years apart. In their respective Boys Ranch lives, they shared a home and a houseparent.

Jabe’s parents have known J.W.’s guardians for 23 years, having met when they all worked in a North Texas hospital. While each couple’s timing and need for Boys Ranch’s life-changing help were unique, the hope they were looking for was the same.

“It was an accumulation of what was happening,” said Jabe’s mother, Sharissa. “We thought, (Boys Ranch) can save him, or at least by limiting the situations where he could choose to do the wrong thing, it could affect his future. We knew he could make just one wrong move and he’d have a record. That’s literally where we were at.”

Years removed from Jabe’s troubles, J.W. was born to a young single mother who gave legal custody of him, when he was 3, to an aunt and uncle.

His aunt chose to home-school him, in large part because of J.W.’s disruptive behavior which already had manifested in kindergarten. The older J.W. grew, the more difficult things became. J.W. was increasingly angry and aggressive. He was curious about his past and wanted answers.

The answers he received only confused him about his very existence.

Several years of conflict left J.W. and his aunt exhausted, mentally and emotionally drained and with no trust. Their relationship was teetering on the point of no return. That’s when J.W.’s uncle asked Sharissa about Boys Ranch.

“When (his uncle) called me, I told him, ‘please, make the phone call before he gets too old,’” Sharissa remembered. “It’s a tough call, because you don’t want to place your children somewhere else.”

In his time, Jabe made the most of his time at Boys Ranch. An exceptional athlete, he conquered and excelled at every sport he took on — football, basketball, baseball, rodeo.

“He had a great work ethic already, but those coaches poured love and work into him and never gave up on him,” Sharissa recalled.

Jabe finally went to a trade school to learn welding, and is now building power-transmission structures.

Jabe is engaged and will be married this October.

“We will all be forever grateful for what Boys Ranch did for Jabe,” Sharissa said.

She said for many years before Jabe was a rancher, her parents supported Boys Ranch. She and her husband Phillip are now donors, and she said she will encourage Jabe to support once he’s a little more established.

“I’ve told him, ‘just remember, appreciate what you got there, because you will never get that again. The people and coaches at Boys Ranch were so invested in you and loved you so much and wanted you to succeed.’ I know he felt it and appreciated it.”

“I felt like I was in a cage all of the time and I couldn’t get out,” he said, describing his life at home. “There was too much structure and I wasn’t able to communicate.”

A few weeks into his time at Boys Ranch, J.W. started playing football, his first sport ever. He was too out of shape. This was an eye-opener to him. He decided he would instead, train for wrestling and get conditioned. His first wrestling season went okay. He’s now doing some weight-training to get in shape for football in the fall, and he plans to wrestle again. He’s looking forward to summer and the many options he’ll have to participate in therapeutic adventure activities.

“At home, I was never busy. That’s what’s so great about this place,” J.W. said. “I’m learning to have a filter, something I never had before. I’m learning responsibility.”

Boys Ranch, J.W. said, helps him understand his own motivations – which, in turn, helps him control his behavior.

“They are big about wanting to know why a kid does what he or she does. I’m being encouraged to talk,” J.W. explained.

Leah Thorn, a houseparent in Carter Home, remembers Jabe well and is getting more acquainted with J.W. by the day.

“They remind me of each other,” she said. “I see a lot of the same qualities in these two young men. They are both very humble and don’t see their own potential.”

She gave an off-the-cuff comparison about the differences in their eating, sleeping and communication habits. She finds it fascinating Jabe and J.W. have never met, yet their parents are friends.

Jabe and J.W. — two young men with challenging behaviors who were unintentionally exhausting their parents and keeping two households in turmoil.

The families hope that one day they will meet, and their discussion can be about how Boys Ranch changed their lives — and saved their families.

← President’s Message: Bringing the family together
Ryan and Brian: Finding peace, one mile at a time →