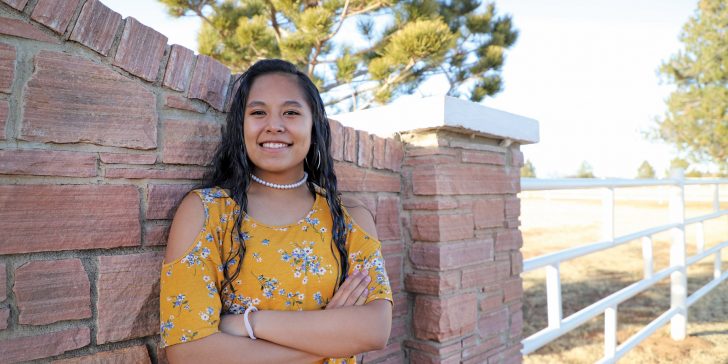 “One of the things I love about Boys Ranch is it is a place where a kid can really shine,” said Oriana, 15, a freshman at Boys Ranch High School.

And, shine she has.

When Oriana arrived at Boys Ranch four years ago, she was angry at a world that had bounced her around from place to place. Boredom and isolation had turned her into a self-focused, impulsive child desperate for new direction and new opportunities. She had been living with her maternal grandparents, who adopted her after her mom died when she was seven, but not before she had spent time in a home riddled with domestic abuse, foster homes and lived for a while with an uncle’s family who had turned her away because she was too difficult.

Oriana had lived in the dark shadow of her mom’s drug abuse, often in unsafe places. As far back as she can remember, she longed to be noticed.

Oriana’s grandfather was her biggest fan, but her grandmother-turned-mom had significant health issues, and despite their desire to raise Oriana, it was just too much. The three had constant conflict. Her often bedridden grandmother simply couldn’t take her places to interact with other children, keeping Oriana largely isolated at home.

Oriana was stealing, leaving the house without permission and telling lies — big ones. On two different occasions, she made accusations that drew investigations by the authorities.

Despite her own illness, when Oriana’s great-grandmother needed additional care, her grandmother began living part-time in another city in order to help take care of her.

Oriana was struggling with attachment issues which made it hard for her to self-regulate. She thought stealing from friends and telling lies gave her a sense of power. In reality, it only kept her from having continued friendships and a sense of belonging.

Oriana’s grandparents sought help from a family agency, who encouraged them to explore placing her at Cal Farley’s Boys Ranch. This would allow her to be surrounded by other children and provide a vast array of opportunities in a structured environment.

“
I love everything about this place. I definitely belong here.

Once here, Oriana said she just had to test the water. Even into her seventh-grade year, she used poor behaviors to gain attention.

It took Oriana a full year to realize she was in a place where all her needs would be met. She found consistent routines, constant activity and abundant love from trusted adults.

Finally, her peers began accepting her, giving her a sense of belonging. She actually became popular.

“I know now that I’ve always wanted to be noticed,” Oriana said. “All my life, I’ve wanted to be the best at something, to be a star, and I never could because someone was always better.”

That all changed in the 8th grade.

“I became really good friends with Adelyn, the daughter of the assistant chaplain,” Oriana explained. “I began to realize that she was always noticed because she’s a great student and a great person. I decided I needed to start following in her footsteps. I didn’t have to be the best, I just needed to be good.”

As Oriana’s learned to channel her emotions into more positive interactions as a teammate and sibling to others in her home, she was surprised to see how much better she was accepted.

Most recently she has been going to weekly neurofeedback sessions which help her work through deep-seated anger issues still stemming from her mother’s death. Athletics have proven to be a great outlet for her. Regular counseling has helped bring healthy relationships with peers and adults.

“I’ve always been really competitive, but I really had no idea how much of an athlete I am. I love competition, but it wasn’t until the coaches out here started challenging me to do some things, that I realized, wow, I really can run!”

Oriana plays basketball, tennis and track, where she excels in the 100-meter hurdles, 200-meter-hurdles and long jump. She has participated in the Boys Ranch Rodeo during the summer. Her outstanding performance during the powder puff football game garnered her a unique invitation to be the punter on the high school football team this fall.

These interactions have let Oriana be accepted for who she is. And, now that she’s no longer fighting for the spotlight, she’s finally become a star.

As she reflects on what has happened in her life at Boys Ranch, Oriana identified finding Christ as perhaps the most significant event. She credits her basketball coach, Kerry Moss, for playing a large role in helping her know her Savior.

One of the fundamental teachings used by Coach Moss with his team members is “Remember Your Value,” or RYV for short. He frequently reminds his players they are a child of God and for no other reason, have great value, a value that needs to be honored and cared for.

“I have had the privilege of being around Oriana since junior high,” Moss said. “I’ve seen her grow into a young lady with great character and I think RYV has helped change her mindset. Her relationship with her faith and overall purpose has grown exponentially.”

Oriana has also learned the big importance of serving others. Her favorite experience of all, she said, has been going with her Boys Ranch peers to help at a local mission.

“We go there and help homeless people, we feed them and serve drinks,” Oriana explained. “By doing this, I’ve been able to see that there are people in much worse situations than me. Sometimes I think I’ve had it bad. Going there has really opened my eyes to how fortunate I am to be where I am.”

Oriana said she believes the most important thing she will leave Boys Ranch with, besides her faith, will be what she’s learned about dealing with people.

“I’ve learned how to handle things the proper way, to use my manners in public and not act a fool,” she said, laughing.

“I love everything about this place. I definitely belong here.”

← Gary: Home, any way you frame it
Nate: A path to fulfill his potential →