The aroma coming off the small grills had passersby salivating.

Three young men were preparing their lunch in the parking lot behind the Julian Bivins Museum at Cal Farley’s Boys Ranch as part of a culinary training experience being offered this summer. On the menu: marinated shrimp wrapped in bacon, fried plantains and fresh grilled pineapple, jalapeno and red-onion salsa.

With the social distancing requirements necessary due to the pandemic, the children choosing to learn about culinary arts this summer are not able to do indoor cooking. The small kitchen in the campus Christian education building doesn’t allow an instructor to always keep six feet away.

Boys Ranch staff, though, look for the creative ‘I can’ in every ‘I can’t!’

Culinary Coordinator Jenny Ortega quickly rounded up some tabletop propane grills and took instead, to the open outdoor air to teach cooking. She has coached several groups of high school-age youth for the past few weeks on how to prepare meals without a kitchen.

“I’ve never done this kind of cooking before,” said Emil, 17.

Seventeen-year-old Dawson carefully uses a knife to slice plantains for frying. In the shade of a large tree with a light breeze going, the temperature is a balmy 87 degrees — recent rains have made the air muggy, but otherwise perfect for outdoor cooking. 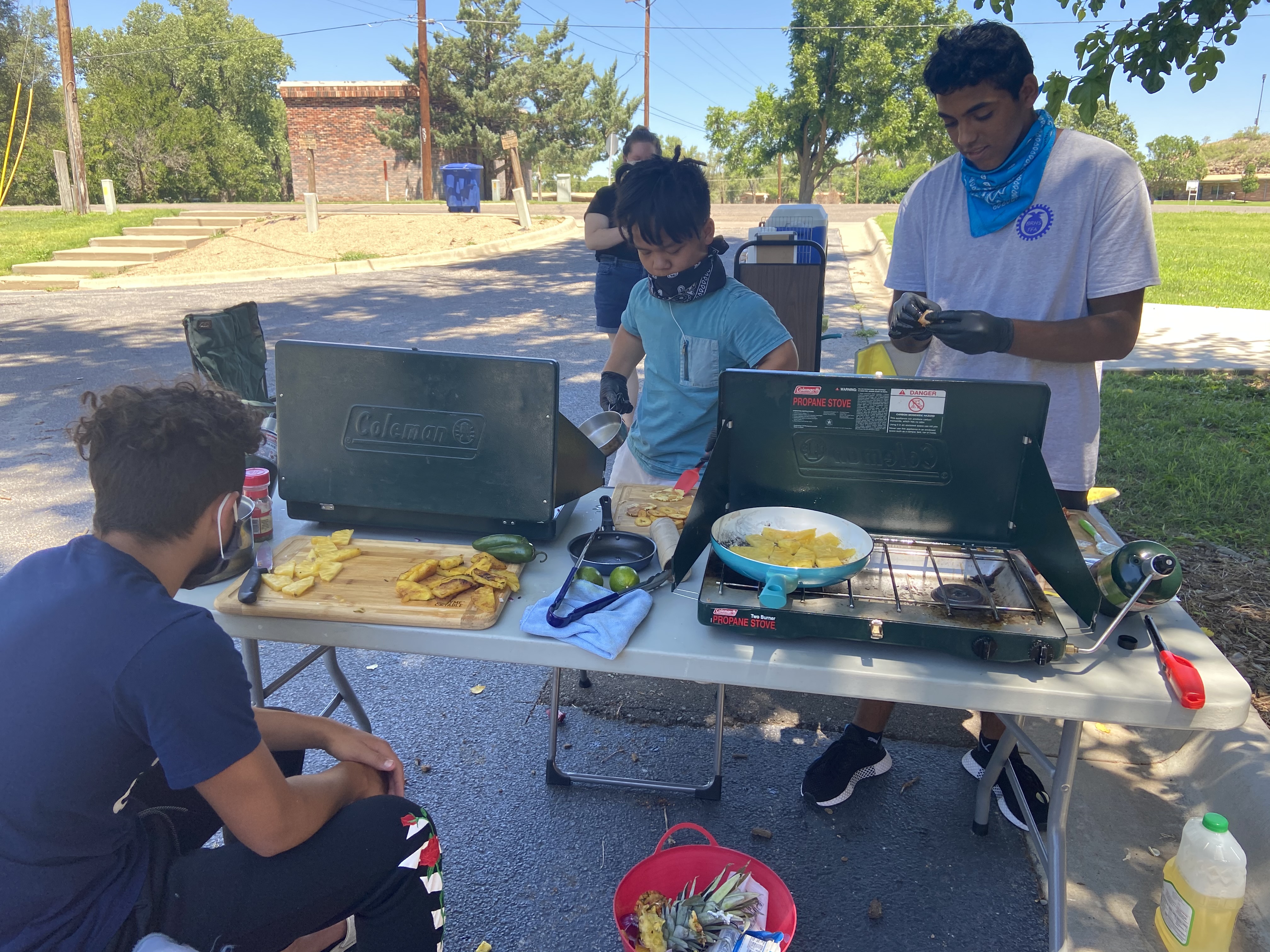 Ortega said she wants the young people to understand the huge variety of foods which may be cooked outdoors. She spent time helping both young men and women in her classes understand seasonings, pairing of flavors and even knife-handling skills. The young people get to choose what they want to cook, staying within a certain budget.

“This is something different than some of them have ever done before,” said Ortega. “They seem to be enjoying it, especially eating what they cook.”

Dawson, 17, is fascinated by his part of the meal.

“I’ve never eaten a plantain, and I’ve never cooked anything like this,” he said, lifting a crisp brown slice out of his skillet and placing it on a paper-lined plate.

He and Emil are running one side of the grill set up for their prep and cook area while Nate, 15, keeps things happening on the other side. Nate is cutting fresh pineapple to be grilled for the chunky salsa.

Braniya, 16, is getting a lesson on how to dice an onion. She’s in charge of making the pico de gallo. A grocery bag sits beside her with jalapenos, tomatoes, cilantro and garlic ready to be chopped.

“I’m learning how to feed my family one day,” Braniya smiled. “Seriously, I didn’t know how to cook anything until I came to these classes.”

Braniya took a principals-of-hospitality class at the high school her sophomore year and plans to take as many culinary arts classes as she can during her junior and senior years.

“This has been really fun,” echoed Fatymah,16. “Last week, we made Ethiopian food and it was really good. So, we are also learning something about other cultures, and I think that’s cool.”

The young ladies made a tomato-and-lentil-based spicy stew and ate it with Injera bread, an African staple in areas such as Ethiopia. 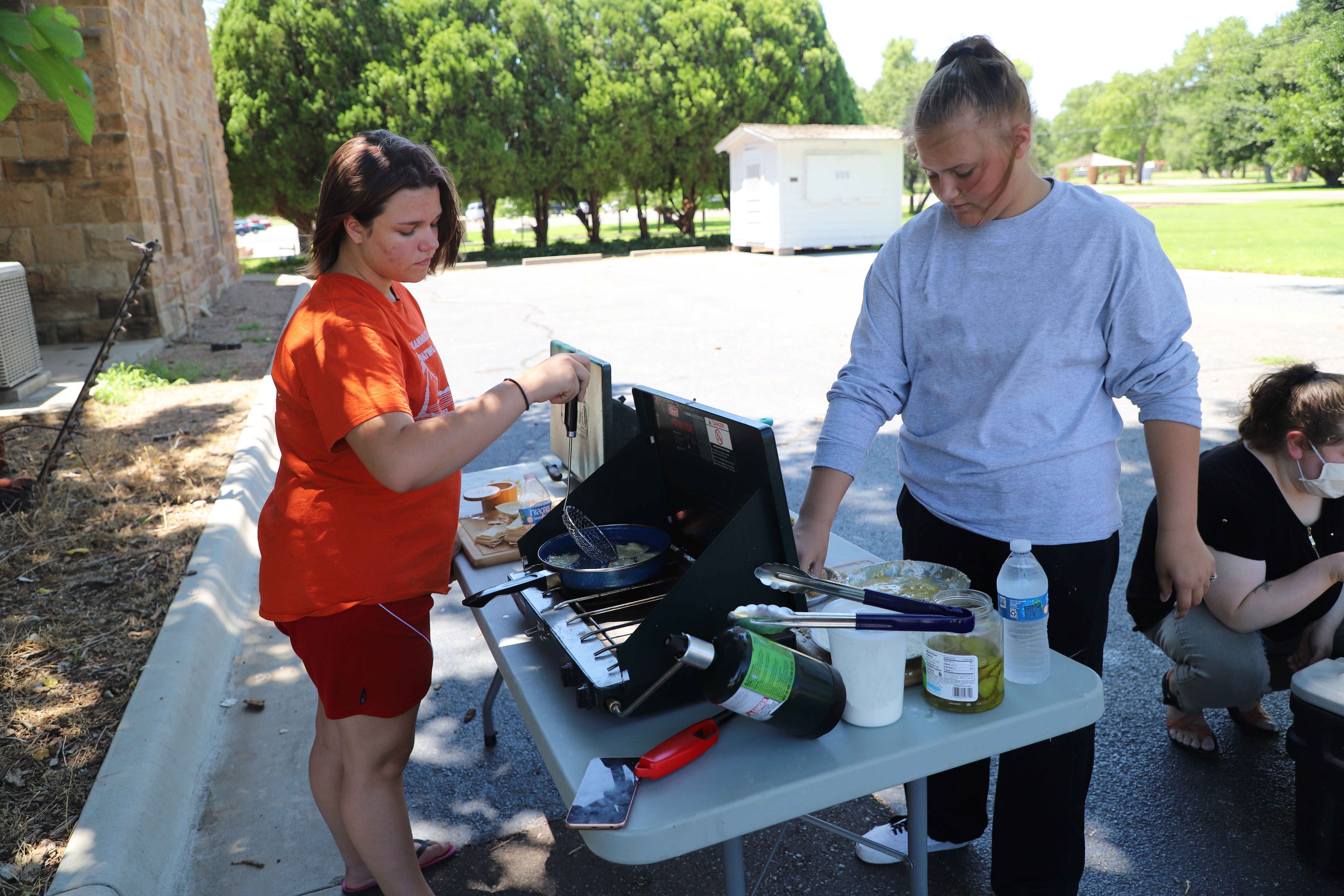 Each of the student groups have one more class to complete in this cooking series. And, Ortega said she plans to offer some other fun outdoor classes this summer.

The Boys Ranch High School Barbecue Club gives the participating teens an opportunity to do some outdoor cooking, but it is done in a very structured and competitive format, according to Ortega.

“The young people who are in our barbecue programs are highly competitive. These outdoor cooking classes are purely for fun,” she said.

The skills the young people pick up doing something like an outdoor cooking class are sure to put new tools in their toolboxes for them to take away with them into adulthood.