The 13th Annual Cardboard Boat Races held at Cal Farley’s Boys Ranch was hugely successful! More boats than ever before attempted to cross the width of Waldrip Pond. Some made it. Some did not.

“This was a record-breaking boat race,” said Luke Benton, Assistant Administrator for Adventure-Based Service at Boys Ranch, who organizes the race each year. 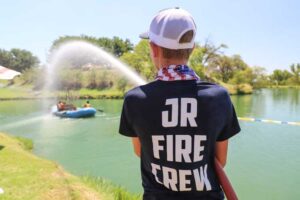 A popular tradition at Boys Ranch, the annual boat races give children an opportunity to work together on planning and creating an entry. It’s a great exercise in teamwork and, as such, participants feel a sense of belonging, power and purpose!

On race day, in a very safe environment, Boys Ranch youth see the reward of their work, giving them a tremendous sense of accomplishment — whether or not their boat sinks or floats! When boats sink, children learn valuable lessons on what defeat looks like and how to gracefully accept it.

Float or sink, though, our youth ultimately experience a great adventure and create a wonderful memory!

However, this year’s race had a different feel.

Due to social distancing rules, the homes competed in ‘waves.’ Each wave included only the competing children from the same community at the race site, resulting in five waves at staggered times. This meant that the crowd was smaller, and the boats entered the water one at a time.

Even so, some of the most memorable traditions of the annual boat races remained.
The Boys Ranch Junior Fire Department was still on hand and once a boat crossed the halfway mark, the children and adults on board were fair game for fire hose fun! As the water flew, the laughter ensued. 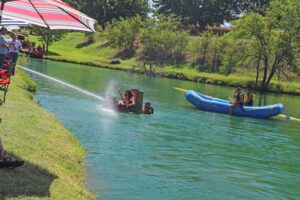 The usual safety measures were also taken with every participating child and adult wearing a life jacket. A rescue crew also followed each cardboard vessel as it maneuvered its way across the pond.

And of course, youth who participate in this annual race are challenged to create a floating vessel out of two things – cardboard and duct tape. Each boat is inspected by the designated Youth Activities Committee members to make sure it meets the rules of the race.

However, over the years, some of our house parents have become skilled boat designers and coach their kids on the design, while other entries are purely the creation of the kids. Size may vary from a boat built for one to a “ship” capable of carrying a large crew. While most of the entries are from the various homes at Boys Ranch, staff and their children, and other groups on campus, may also bring boats to the race.

This year’s entries included a houseboat by Romersi Four which was dolled up with flower planters at the base of the windows. Unfortunately, the three girls taking it into the water didn’t make it very far. 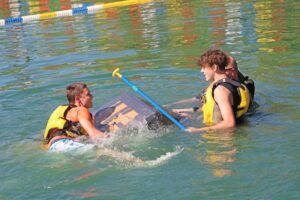 “This was so fun!” said Annmarie, 15. “This is my third year here and I’ve never done this until this year. I wish I would have done it before now!”

Annmarie and several of her house sisters had a second entry for Romersi Four which was a fancy surfboard. Unfortunately, it didn’t float very far before it took a plunge, leaving them to swim the rest of the way across the pond.

Romersi One, on the other hand, built a Valkyrie Viking ship that sailed far and wide with four occupants in full costume on board.

“That thing is seaworthy,” said Nicole Murphy, the primary house mom who helped make Viking costumes for the crew on board.

Hamilton Home’s bright-colored boat, ‘Oh My’ Snacker Grabber, made from snack boxes was by far the most colorful entry, while Fischer Home’s, COVID Stopper, unfortunately sunk before it hardly left the shore.

Among the boats to receive special titles and recognition were the Canoe Cruiser, the Iron Sides SS Texas, the Minnow Grouper, the Nimitz Valkyrie, the ‘Oh My’ Snacker Grabber, the Great White Shark, the COVID Stopper and the Titanic.