Counting kestrel hawks is now on the mind of some of the youth at Cal Farley’s Boys Ranch.

Many of the adults who are aware of the national Kestrel Nest Box Project are also excited about the ranch’s participation.

“What an awesome opportunity for our young people to get some real life, scientific experience,” says Keely Miller, Director of the Experiential Learning Program. “By having this hands-on opportunity, our kids get a chance to really see what it would be like to be a biologist or to do other kinds of research work.”

Through a nationwide wildlife conservation effort, and in a partnership with the Amarillo Zoo, several nesting boxes have been strategically placed at Boys Ranch. Students in biology and wildlife classes are monitoring the activity at each site and will be helping to create a national database to track the population of this bird. According to Miller, the young people helping with this project are doing it through one of two learning avenues. Some of the participants are involved through Cal Farley’s larger Experiential Learning Program. Others are involved through a biology class at Boys Ranch High School.

The American Kestrel, often called sparrow hawk, is a small robin-sized falcon, and the only kestrel found in the Americas.  It is the most common falcon in North America. When they are migrating, they are common all over Texas but they especially like the northern part of the state, including the Panhandle. Biologists have noted their numbers dropping over the last decade. 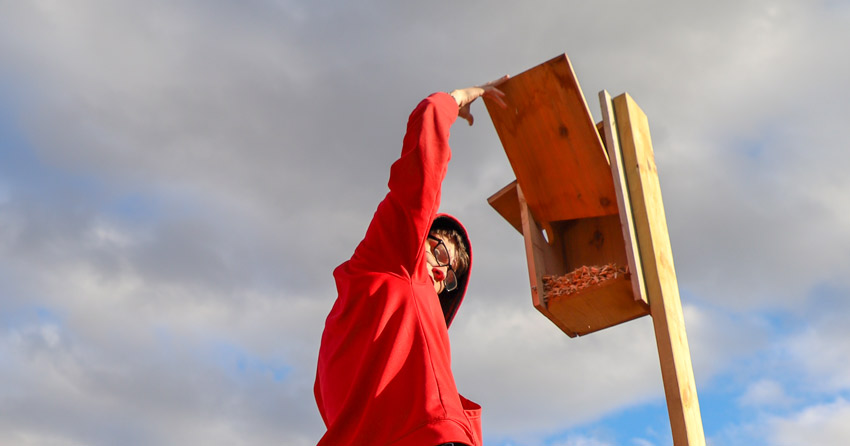 “They love to live in the crevices of old dead trees,” said Mike Boley, visitors services coordinator for the Amarillo Zoo, who is helping with the national research. “The kestrel is facing a number of challenges and conservationists are doing some things now in hopes that they may curb this decline.”

The zoo is working with landowners, nature centers, schools and others to put up and monitor nesting boxes. And, Boys Ranch is an ideal nesting area for the kestrels.

One of the boxes has been strategically placed behind Jefferies Home, one on the opposite side of campus by the horse barn and several others in outlying places. Residents will monitor the boxes, watching to see if nesting is taking place, counting kestrels in the area and will make quarterly reports back to the national database.

“We provide the box on a permanent loan basis, giving the participant specifics about where and how high it should be located,” Boley said.

January and February are the ideal months to get the nests put up, as that is when the male kestrels are searching out a place to live.

“They are an interesting bird as the male finds a suitable home and then the females come to him. They become year-long mates and raise their babies together,” Boley explained.

Boys Ranch residents participating in the program will be closely monitoring the nesting boxes.

“We ask them to count how many kestrels they see and then to watch if young emerge from the box and how many come out. We ask them to report positive and negative. We want to know if the nest is taken over by some other birds as well,” Boley said. 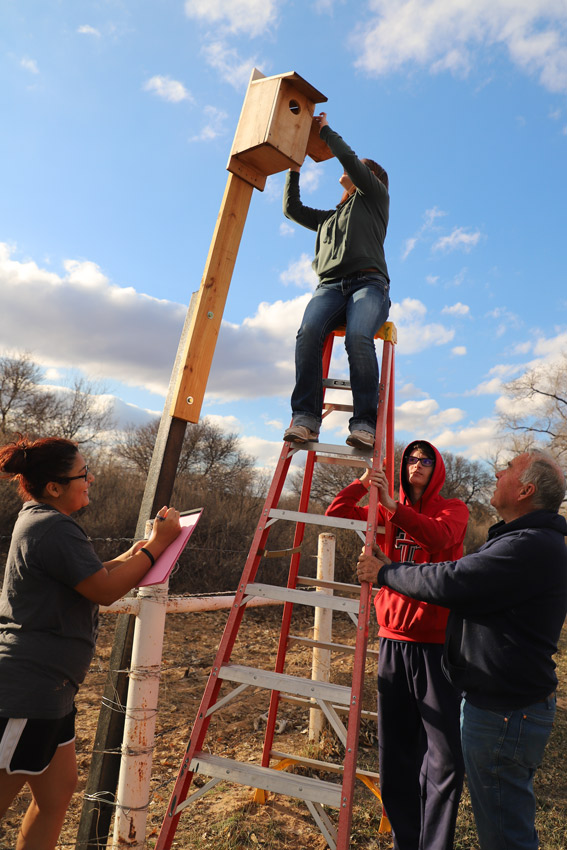 It was Boys Ranch High School art teacher Ali Sanders, who brought this opportunity to Boys Ranch. She volunteers at the Amarillo Zoo on a regular basis in its education department. When she heard they were wanting to place nesting boxes out for the kestrels, she immediately thought of Boys Ranch.

“I thought what a great opportunity it would be for our young people to be involved in this effort,” Sanders said. “It is a great way for Boys Ranch to have a public interface.”

The boxes at Boys Ranch will stay in place for as long as they are being used by the birds, and future classes will continue to monitor the activity and make reports. A few more boxes may even be placed at various locations on the ranch.

According to wildlife teacher Tim Nation, chances are good that the kestrel population is solid at the ranch.

“We put a box up specifically for an owl we had here,” he said, pointing to bird house located near the campus garden center. “The kestrels took it over last year and the owl never got to use it.”