A rhythmic tap could be heard across Simpson Dining Hall Friday morning. It was the kind of obvious noise you hear when cooks with skills are cutting it up. Cutlery makes a very specific sound when it comes in contact with a cutting board.

Something big was about to happen, clearly evident by the heavy aroma of cooking bacon.

Riley and Julia had chopped artichoke hearts up into small pieces — six gallons worth, to be exact. Elvis and Chris were well into crisping 15 pounds of bacon in the oven, then planning to dice it. The 30 pounds of macaroni had been cooked and was ready to go. The béchamel sauce from a secret recipe was the only thing waiting to be fixed. 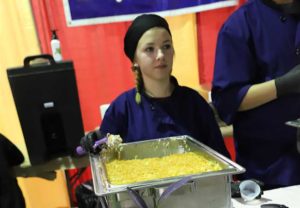 This, however, was an all-new group of Boys Ranch residents.

“We have a really good recipe, so we should win,” Riley chimed in.

The culinary arts team from Boys Ranch was in the middle of prepping the various ingredients to go in their mac and cheese entry for The Big Cheese event on Friday night. The annual event is a smack-down among local eateries and schools to see who can make the best mac and cheese, all for fun, and for charity. All proceeds benefit another area non-profit that helps children and families heal after the loss of a sibling, parents, grandparents or child.

Culinary arts, one of many experiential learning programs at Cal Farley’s, is designed to help ranchers build skills which can lead to a career. Four Boys Ranch students ─ Riley, Chris, Julia and Elvis ─ were being coached by culinary arts teacher Katheryn Lytle.

This was the first time for these young people from Boys Ranch, and for Ms. Lytle, to compete in this — or any other — food contest.

Participating in a cooking competition that has a charitable element to it provides several benefits to the young people at Boys Ranch. The philanthropic side of the event does not go unrecognized. 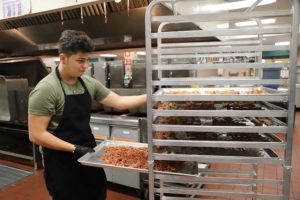 More than 25 food entities entered the competition in 2019, with awards being presented for the Peoples’ Choice, Kids’ Choice, Judges’ Choice and High School Culinary Arts categories. Those who bought tickets to the event could sample all the flavors and vote for winners.

So, what’s the key to great mac and cheese?

At the event, held at the Rex Baxter Building on the Tri-County Fairgrounds, the four culinary students realized very quickly that being cheesy isn’t all that easy. Setting up for the event was physically tasking, and working the crowd was a total necessity.

As hundreds strolled by the Boys Ranch table to pick up a sample of mac and cheese to taste, Chris and Elvis quickly began making friends, and asking for their votes. Riley and Julia did a whole lot of smiling and serving, too. Ms. Lytle has been helping the crew from the get-go, including perfecting the recipe’s ingredients.

The Artichoke Bacon Alfredo mac and cheese definitely was a crowd favorite. Many came back asking for a second sample. Most of these same fans were putting their voting ticket in the jar on the Boys Ranch table.

The two-hour evening drew to a close, and still, many spectators waited around to hear the winners be announced. With bated breath, the Boys Ranch team listened intently to see if their names would be called.

“And the winner of the school division is …” came a booming voice over the microphone, rolling across the big metal building “Cal Farley’s Boys Ranch! Come get your trophy!”

After high fives around the serving table, the team made its way to the winners’ circle to collect the traveling trophy for 2019.  Many in the crowd cheered and congratulated the kids.

The team returned to its station to clean up and pack up for the trip back to the ranch. But first, most of them took time to enjoy a few bites of their still-warm, award-winning entry.

Not much boasting was happening, though.  It’s hard to brag much when your mouth is full of first-place pasta.