A high school barbecue team from Cal Farley’s Boys Ranch will appear on The Cooking Channel this Saturday, June 6. The program, Varsity Barbecue, will air at 11 a.m. Central time. It documents the activities of the Boys Ranch “Smokey and the Bandits” team when they competed at regional and state high school barbecue competitions during the 2018-19 school year. 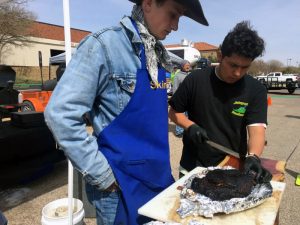 Smokey and the Bandits, a team made up of Boys Ranch residents Kaden, Bryce, Trae, Sebastian and Dylan, coached by culinary arts teacher Linda Horton, first competed at the regional contest held in March 2019 at the Texas Tech Meat Lab in Lubbock, Texas. Two teams from Boys Ranch who competed in Lubbock qualified for the subsequent state contest.

In Lubbock, Smokey and the Bandits, who were competing on a special grill, smoker and chuckwagon made by students at Boys Ranch, captured the attention of a film company doing production for The Cooking Channel’s parent company, The Food Network. Intrigued by the Boys Ranch culinary program, the film crew began covering Smokey and the Bandits in greater depth.

In May 2019, the Boys Ranch team traveled to Burnet, Texas, to compete with 50 other teams in the Texas High School BBQ Cookers Association state cook-off. Boys Ranch captured a first-place award in the Build Your Own Pit competition. This 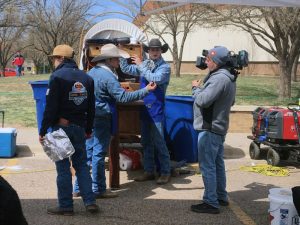 competition was again covered by the film crew, who also visited Boys Ranch late in 2019 to film the team in their home setting.

I’m so excited that Smokey and the Bandits was chosen to be a featured team for the Varsity Barbecue show,” said Horton, “This was our first year competing, many memories were made and these guys will have a special bond for a lifetime. It was an awesome experience for everyone.”

Culinary arts, including barbecue competitions, FFA, welding and woodworking are several of the 20-plus skill programs available to Boys Ranch youth as part of the therapeutic organization’s Experiential Learning Program. Youth are encouraged to participate in these various programs, taught by teachers or coached by mentors, which help them develop life and employment skills.

The filming and show production were done by Efran Films, headquartered in New York. The Cooking Channel airs on channel 232 Direct TV and channel 113 on Dish Network.