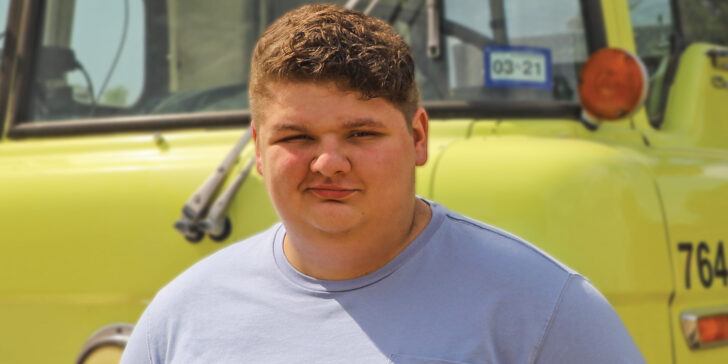 Morgan knew his grandmother was serious when she said, “I’m done.”

They were painful words for the eighth-grader to hear.

Morgan also knew he had been misbehaving and he’d been warned numerous times. Morgan said there was something that just wouldn’t let him make better choices. He knew he wasn’t a bad kid … but he didn’t know how to stop acting the way he was acting.

“My grandma told me she was going to find a military school to send me to,” Morgan remembered.

He knew that wasn’t where he wanted to be, but out of curiosity, he got online and searched for ‘military schools near me.’

Although it has no connection to the military, Boys Ranch popped up among the Internet search results.

Morgan scrolled through the website, www.calfarley.org, and read about a place that didn’t have marches or drill instructors. Instead, he saw ponds, happy homes and horses.

“I looked around until I found where I could apply,” Morgan said. “I printed it out and gave it to my grandma and told her I wanted to come here.”

Born to a teenage mom, Morgan spent his first five years with an aunt. His mom reclaimed him, but only after having three more children. Morgan, being the oldest, often was the babysitter as his mom left the house.

At age seven, Morgan met his father for the first time.

Morgan learned his dad is a paraplegic who lives with Morgan’s grandmother. His dad has many struggles of his own, still, Morgan longed for a relationship with him.

“One weekend, I stayed with my dad and grandma. While I was gone, my mom did some crazy things and Child Protective Services came and took the other three kids,” Morgan said.

Instantly, Morgan’s visit became permanent. He had new rules at home which didn’t sit well with him. By age 13, Morgan was participating in illegal activity, picking fights at school and at home. When he was suspended from school for 45 days, grandma was done.

A PLACE TO START OVER

Morgan arrived at Boys Ranch in 2018, tense, nervous and triggered. He was determined to fail. Thankfully for him, his childcare team knew he was probably not functioning at his highest capacity at the time, and expected the very behavior he soon displayed.

“I tried to get myself kicked off,” Morgan admitted.

One day, he ventured onto a neighboring ranch, where area cowboys had parked a pickup and trailer while they gathered cattle.

“I contemplated for a long time before I did it,” Morgan said. “But the pickup had keys in it, and I got in it and started driving. I didn’t get very far because the cowboys chased me down and stopped me, but not before I jackknifed the trailer.”

It was a cry for help that Morgan’s mentors heard loud and clear.

“Instead of kicking me out, they reached out to me to find out why I did what I did,” Morgan said. “I didn’t really know why I did it, but they helped me process through how I was feeling and what I was asking for when I did it and why. I couldn’t believe these people did what they did. I was moved into a different home that was a better fit, given a chance to pay for the damage I did and was told no charges would be filed. All they asked of me was for me to learn from my mistake. Who does that?

LOOKING PAST THE BEHAVIOR

Anyone who knows the spirit of kindness, love and generosity at Boys Ranch knows this campus is a place made for second chances — and unconditional acceptance.

“One thing we try to provide is unconditional positive regard, instilling in the kids that we love and care about them because of who they are, not what they do,” explained Tiffany Carpenter, Director of Clinical Intervention Services. “Children need to know they are loved and cared about and seen, no matter what.”

Morgan’s childcare team looked past his behavior at what was driving it — he’d put up some high walls when he arrived at Boys Ranch that kept him from connecting with trusted adults and peers. He’d not let himself even try to feel safe or as if he belonged. Yet, he was surrounded by understanding, encouraging adults who did not want to let him fail. This realization changed his outlook.

Morgan has made a total turn around since this incident. He is doing better in school and has enjoyed being an FFA member, where he has raised and shown market lambs. He’s also an important part of the Boys Ranch Junior Fire Crew. During a recent prairie fire on land adjacent to Boys Ranch, Morgan was entrusted to drive one of the water trucks. He takes his fire training seriously and plans to be a member of a volunteer department in the future.

“I love this place now.” Morgan reflected on his new perspective. “I’ve learned so much about trust and patience.”

Morgan also knows firsthand how a second chance can turn around a child’s world.

← Hunter: On a better road now
Marlie: Focused on what matters most →