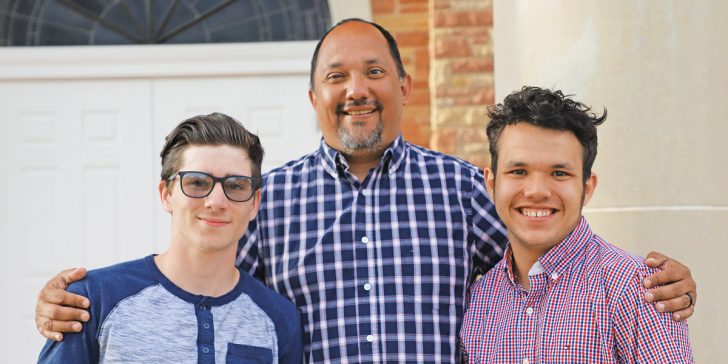 Shared parental experiences can lead to healing and success for children

Jose Gonzales knows a thing or two about working with young people. He’s worked 21 years in public education. He coaches track, football and basketball with young people whose positive behavior and grades are largely motivated by athletics.

He is also an assistant principal at an area high school, where he is assigned to the Disciplinary Alternative Education Program.

The DAEP is an approach used by many schools to manage behavioral problems in school-age children. It allows a child who is being disciplined for severe, unacceptable behavior to continue to be in school, but in an environment separate from other students.

While Gonzales believes DAEP has its role, he’s not convinced it is best for some students. Having had significant struggles with his own son, Joseph, which ultimately led to Joseph’s placement at Boys Ranch, Gonzales said he and his wife, Lucy, believe the trauma-informed approach used here trumps anything else he’s seen. So much so, that they have referred other families dealing with difficult children to Boys Ranch, too.

“I knew about Boys Ranch because a friend of mine used to be a coach and Spanish teacher out here,” Gonzales said.

He’s always followed the work being done with children at Boys Ranch closely.

“They accepted Joseph out here, and that was a great thing for us as a family,” he said.

A hurting Joseph came to the ranch in 2015, almost 14 years old. He was acting out at school and at home. His disobedience and risk-taking behavior grew bigger by the day.

Turmoil had a grip on Joseph. He hadn’t seen his biological mother for 6 years, and his dad had re-married. His older sister who had been his confidante and homework tutor moved out. His hometown address had changed five times in five years.

Joseph’s life took a drastic turn when he was caught stealing from the school’s concession stand. Despite 14 days of DAEP, he still did it again! And, of course, there was the stigma of being a coach’s son involved in such behavior. DAEP certainly didn’t deter him. And, any home discipline that was handed down had zero affect. Joseph seemed to have lost his values. He wasn’t deciphering what was right from wrong.

Thinking his son was one theft away from a criminal record, Jose and Lucy called Boys Ranch.

Gonzales found himself supervising 15-year-old Jerrod as he sat in a cubicle in the DAEP building. Jerrod sat and did his studies, getting only a few short breaks each day. Gonzales knew Jerrod, had coached him. He knew Jerrod could be a strong student and the two actually had a fairly good coach/player relationship.

“Jerrod is not a bad kid, he just was making some bad choices,” Gonzales said.

Gonzales decided he would recommend to Jerrod’s parents that they consider placing him at Boys Ranch, sharing with them the success his own son achieved here. The location, structure, accountability and opportunities that Boys Ranch gives a young person could only help Jerrod.

Jerrod’s parents made the call.

Gonzales believes it is good when one parent or guardian recommends Boys Ranch to another, saying a shared perspective can be powerful.

“Lucy and I just wanted to be of help to other hurting parents,” he explained. “Placing your child away from home is hard, and we felt kind of lost. Boys Ranch told us what was going to happen, but we didn’t understand it. Until you go through it, you have no way of knowing what to expect.”

Joseph has another year at Boys Ranch, then plans to pursue a college degree in criminal justice. He plans to run track at the collegiate level. He will leave Boys Ranch a changed person, stronger academically, socially and spiritually.

For his part, Jerrod said Boys Ranch has been a wake-up call. He’s working hard to meet the goals set for him in order to reunite with his family.

Both young men agreed the structure and supervision provided at Boys Ranch has righted their paths.

Where do our children come from?

We’re often asked questions about our children at Boys Ranch.

Where do they come from? Are they orphans? Who has custody of them? Are they available for adoption?

Children from all over the nation find their way to our Christ-centered organization. Most of them are brought here to participate in our exceptional programming by their parent(s). Other times, it is another custodial relative who places a child with us. Occasionally, children find us on their own, usually on the Internet while searching for the help they know they need. These children may seek to self-admit. However, only with the blessing and involvement of a parent or legal guardian are they chosen to be here.

The youth who call Boys Ranch home have been referred to our care by pastors, alumni, agencies, caseworkers and other professionals including teachers, coaches and counselors.

Regardless who sought their placement, our children always remain in the custody of their parents, managing conservator and/or guardian. When a child is in our care, the parents/guardians become part of a Boys Ranch team whose only purpose is to love the child and provide all the care and supported possible to allow any needed healing to occur. Likewise, if a parent or guardian chooses to take their child out of our care, they may do so at any time.

As part of the child’s care team, the parents/guardians are always aware of the progress their child is making at Boys Ranch.