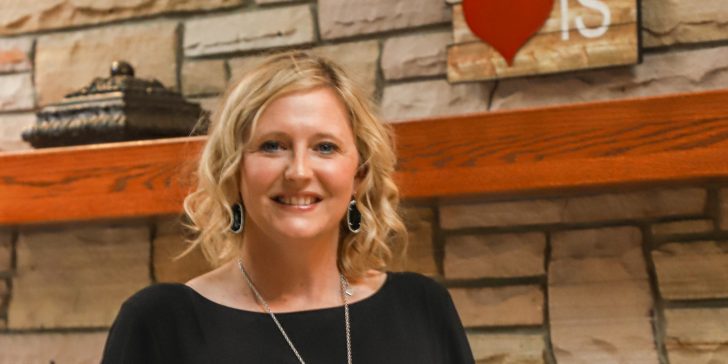 Corey remembers being one of the first girls on ranch

Decades removed from childhood, Corene, or “Corey,” as she prefers, still gets emotional when she talks about growing up in the loving arms of Cal Farley’s.

She was one of the very first girls to live at Boys Ranch, moving into the brand new Romersi Home in 1992. As Boys Ranch celebrates its 80th Anniversary, Corey came back to reminisce about when girls first arrived at Boys Ranch.

“They came to Girlstown, U.S.A. (a Cal Farley’s program since 1987), and interviewed all of us who had brothers at the ranch,” Corey remembered. “We all got to go.”

A California native, Corey and her brother came to the Texas Panhandle together.

“My foster parents adopted four of us, two boys and two girls. The two boys were biological brothers, but the other girl and I were not,” Corey explained, tearing up as she tells her story to current residents of Romersi Home over a chicken pot pie dinner. “Our parents decided they didn’t want us and looked for places to send us. We were all interviewed for placement in Texas, but only I and one of the boys were selected. We were considered siblings.”

In 1991, the family unit Corey had wanted so badly, fell apart.

“When I found out I was moving to Texas, I thought everyone rode horses and wore cowboy hats and boots. I thought everything was on a dirt road,” she laughed, adding, “and I was so disappointed when I realized I didn’t get to ride a horse to school.”

What Corey did find at Boys Ranch was much-needed structure. As she peeked inside her old room, Corey smiled. Her same dresser, brought with her from Girlstown, is still being used.

Corey remembered getting up every morning, going with the other girls in the house to headquarters, then going to breakfast and on to school.

During her time at Boys Ranch, Corey ran cross country, track, played basketball and competed in rodeo. She still holds the record at Boys Ranch for the 200 meter, 25.10 seconds, set in 1995. She shares the record for the 400 meter as well.

“I put Boys Ranch on the map when it comes to girls track,” she chuckled.

After graduation from Boys Ranch, Corey used the $25,000 selling price of a prize steer at Boys Ranch to buy and insure a car, rent an apartment and to pay for schooling.

Now married for 16 years with a daughter, Corey works in a management role. She said she leads a very happy life, and admitted to parenting her daughter much like she was at the ranch. Marriage has finally given her the family Corey always craved.

“I learned responsibility at a very early age because I only had myself,” she said. “Boys Ranch taught me ownership and self-worth. Without that, I don’t know where I would be.”