Boys Ranch FFA members reap the rewards of their labor

One of the highlights of the year for the members of the Future Farmers of America chapter at the Boys Ranch Independent School District is the Oldham County Stock Show and Sale. It is a place where these young people reap the reward of months of very committed work.

Under the guidance of vocational agriculture teacher and FFA adviser Scotty Wright, the ranchers have been busy. For more than four months, they’ve made their way to the livestock barn at Cal Farley’s twice a day, seven days a week to feed and water their pigs or lambs. They’ve walked the show animals, sometimes a mile or more in a day to get them in tip-top physical shape. These young people have shaped these four-legged enterprises into docile colleagues, ready to perform well in the show ring.

The FFA livestock projects are, indeed, an enterprise for these young people. They are a teaching tool on animal selection and care, time management, behavior modification and financial management, among other lessons. Each rancher has invested or reinvested money from his or her own vocational program earnings to pay for the feed and bedding for the animal, knowing in the end, they will sell it for a profit. For some of them, it is their second or third year to prepare an animal for the show and sale.

Naturally, the youth name their critters. Jonathan’s hog is named Squirrel. Bryce calls his pig Picnic, as in picnic-cut pork shoulder. One lamb has been labeled Dino because when he first came to the barn, he often roared like a Tyrannosaurus Rex. Another lamb is named Boots, denoting the black-faced Hampshire’s four dark legs.

“Sometimes I talk to him,” says 15-year old Jordan as he’s walking his Duroc market hog, Dido, around the lot adjacent to the barn.  Minutes earlier, his 260-plus-pound hog had darted through a wide spot in the fence and taken off cross-country. Jordan gets him gathered up and put back into the walking lot with the help of another rancher named Coleton. The hogs usually outweigh their owners, easily by 100 or more pounds.

“And, sometimes he talks back,” Jordan says, grinning. 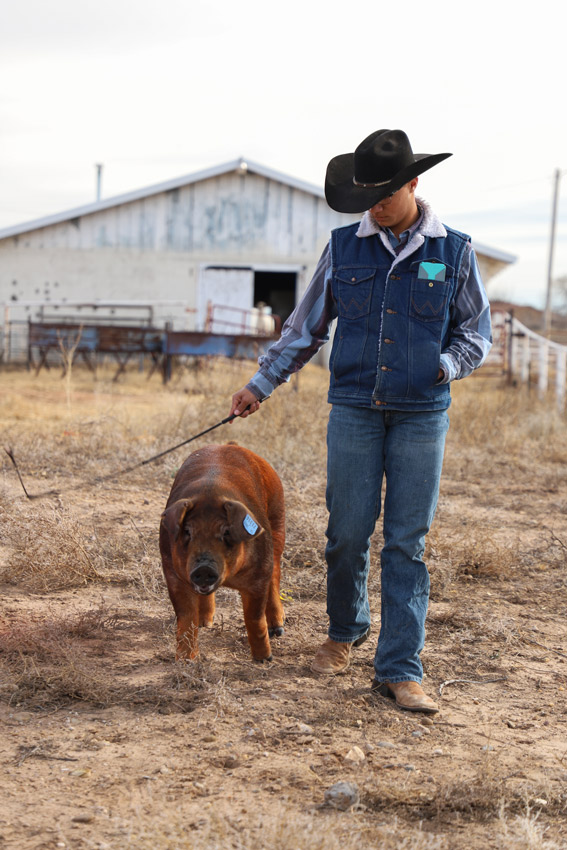 What the conversations are about, no one needs to know. At a place like Cal Farley’s Boys Ranch, everyone wants friends, regardless of how many legs they have. Jordan and Dido walk and talk. The young man, wearing a black cowboy hat, has some country music playing from the cellphone tucked in the front pocket of his denim fleece-lined vest. He thinks Dido likes the music, and maybe he stretches out and walks a little taller when he’s hearing it play. Walking tall is a good thing, in pigs and people. The judge at the stock show will be looking for a hog that walks tall with a head that comes right out of his neck. A wide-chested, long-bodied, big-boned pig with awesome hams is what will most likely win.

“I think of a sheep as being like a horse,” says Morgan, 16, as he’s washing his market lamb and preparing it for Mr. Wright to clip for the weekend show. Like Jordan, he’s only been at the ranch for a little over 6 months and FFA has been a wonderful experience for him.

“A sheep will mimic your emotion. Getting mad at the animal doesn’t do any good,” Morgan notes. “My lamb is still a work in progress. If I keep calm, he stays calm.”

Morgan describes in depth what he’s learned about showing a market lamb:  “You have to press your knee into the lamb’s chest and lift and turn the head so that the judge sees the best features of the lamb.”

He knows, too, that he must keep on the opposite side of the lamb facing the judge.

Morgan tells about a short experience with a horse of his own before he came to Boys Ranch.

“My step-dad stopped making payments on it, and the people took it back,” he says, a flash of disappointment coming over his face. To have his lamb project, Morgan had to take out a loan from the FFA program, which he will pay back when he sells Dino at the county stock show. He has enjoyed being at the ranch where he can be with horses as well. Morgan says any money he gets from selling the lamb will first go to pay back the loan he has. The rest will mostly be put in his savings account.

“I will be able then to use it to help pay for an apartment or to get a car or something when I leave here,” he says. 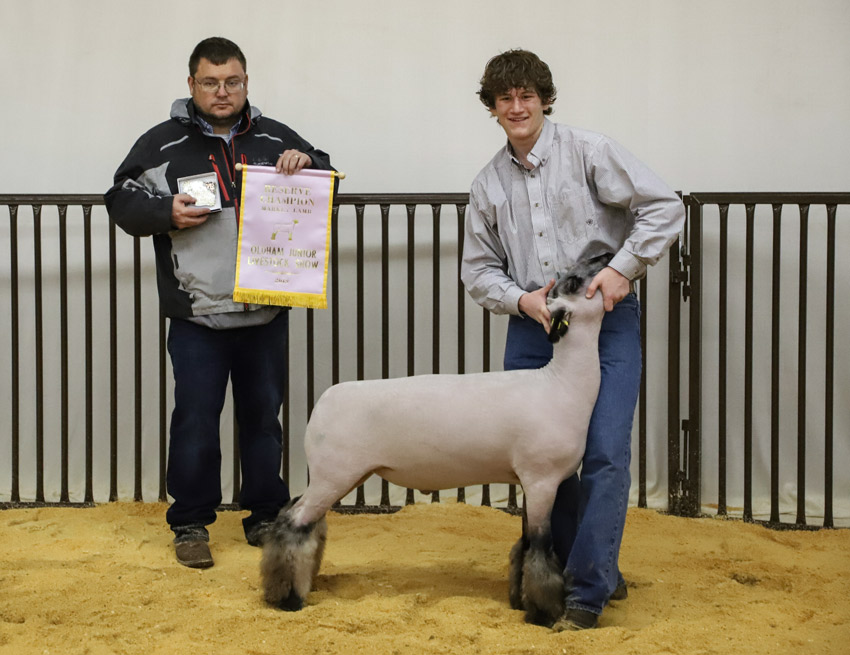 For Boys Ranch High School junior Abbie, who won her perspective class with her cross-bred pig, Cal Farley’s has been a game changer. Some of her family members drove from two states away to watch her show on this day.  She’s been at the ranch a little over 3 years.

“Cal Farley’s has made a world of difference for Abbie,” says a close relative sitting near the edge of the show ring.

Once Abbie and her pig exit through the gate, five relatives scramble to go to congratulate her on an awesome showing.

The livestock sale saw all of the Boys Ranch FFA members receive top dollar for their entries. Individuals and businesses from the area, who understand the impact both Cal Farley’s and FFA can have on a young life, opened their hearts and their checkbooks to reward work well done.

When Conner’s hog sold for a high price, he was so excited he did a front flip in the sale ring! He landed firmly on his feet, much to the crowd’s delight.

The work for the Boy’s Ranch FFA members is not over. They still have some miles to drive and work to do. Some members will be taking livestock entries to the stock shows in Fort Worth and San Antonio between now and the end of February.

PrevCharlie Brown® back in business at Boy’s Ranch this Christmas
PHOTOS: Boys Ranch wins big at The Big CheeseNext