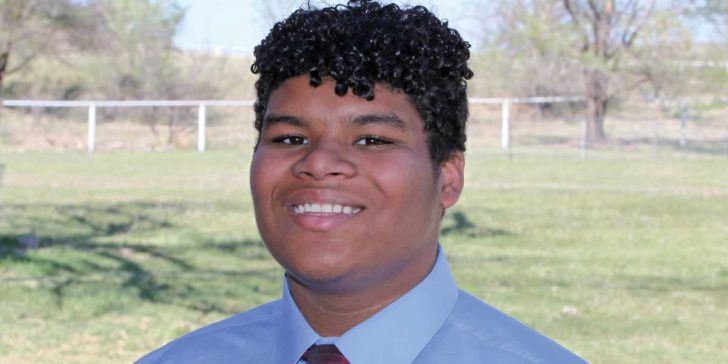 As several of his peers milled around the rocket on the table, Devon, 18, intently listened as his mentor and rocket club coach Barre Wheatley reminded him what the next step was going to be to prepare the rocket for launching.

Devon was nervous. After all, he had worked for six months on this project. He’d calculated the likely altitude, adjusted the design and hand-formed the carbon-fiber stabilizers. Expectations were literally very high.

When launch day arrived, a full entourage from Cal Farley’s Boys Ranch gathered at the ranch’s launch site to watch the rocket launch. Wheatley knew conditions were good for a flight, he had gotten the necessary Federal Aviation Administration clearance for the launch to make sure no aircraft would be in the area. This rocket was expected to be, in Wheatley’s words, “a doozy.”

Other members of the rocket club helped Devon pack the motor, fuel, camera, parachute and electronic tracker into the 83.5-inch rocket’s body. After several efforts and coaching from Wheatley, the rocket perfectly slid together. Devon’s endless hours sanding the fiberglass shell until it was slick as glass paid off.

The quarter-mile walk from the staging area to the launch pad felt like miles for Devon. He carried the long, 43-pound rocket over his shoulder.

A countdown was called out, and Devon pushed the launch lever. A collective ‘wow’ rang out as the rocket roared into the sky. Devon learned a few hours later he’d set a new altitude record for Boys Ranch — 34,630 feet!

“That was so cool!” Devon said. “I didn’t know what it would do, and a lot of people showed up. It was awesome to have it do what it did.”

In many ways, Devon’s launch is a metaphor for his time at Boys Ranch. It has been filled with endless adventure, new learning, activities, life lessons and limitless dreams. In May, he graduated high school, and looks forward to the adventures that await him.

Prior to Boys Ranch, Devon was home-schooled by a single mother. He spent most of his time at home; his social circle included mom, two older sisters, a younger brother with special needs and the nurses who came to the home to provide his brother’s care. Devon had grown increasingly restless and began acting out. He bickered with others in the house and didn’t want to do schoolwork. He missed two older brothers who didn’t come around all that much anymore.

Devon’s mother understood his frustration. She knew he needed positive male influence and help with school. She reached out to Boys Ranch.

“It’s given me way more than I expected,” Devon said. “I’ve learned new ways to learn things, to be responsible for my actions. I’ve learned rocketry, which is my favorite.”

Devon has enjoyed many adventures at Boys Ranch. He’s enjoyed wrestling, baseball, tennis, Spanish Club, 3D Design and gone on trips to other cities and attractions. He said a trip with the Rocketry Club to Meow Wolf, an interactive art experience in New Mexico, was especially enjoyable.

“There are lots of seemingly endless possibilities at that place,” Devon said.

At Boys Ranch, Devon worked hard, with help both at school and in his home, to get back on grade level and meet his graduation requirements. The coronavirus interrupted his senior year, but he was able to do schoolwork online to still graduate. The new graduate saw a bit of irony in having his senior year interrupted by a virus that forced social distancing.

“I’ve learned how to be more sociable,” Devon said with a smile. “I’ve discovered that I’m funnier than I ever knew. I’ve learned to be more respectful to others, and to not be afraid to try new things.”

Devon credited the trusted adults and mentors who always encouraged him. They helped him understand why something may have failed and celebrated his successes.

“We have seen him come out of his shell and be more social with his house and at school,” said houseparent Sundi McClain. “We look forward to seeing what he does. We know he’ll succeed at whatever he pursues in life.”

For his part, Devon said Boys Ranch taught him important life skills he lacked before.

“I know how to budget and save money,” Devon said. “I learned how to cook through my Experiential Learning Program in the cafeteria. I also took culinary arts classes at Boys Ranch High School, something I really enjoyed. I even learned to drive here!”

What Devon has learned in technology (computer science, electrical systems and rocket construction) are employable skills he can apply to many high-tech areas. Devon wants to work in computer programming.

“This young man has a lot of perseverance!” Wheatley said. “The first rocket he built was lost due to a parachute-deployment issue. He had worked on that one for almost a year. I asked him if he wanted to rebuild and try again. I honestly thought he would say no because he knew how much work was involved and we only had six months to build a second one. He thought for a few seconds and said, ‘yes, sir, I want to try it again.’ I was pleasantly surprised.”

Devon credits Wheatley and Robert Tucker, a houseparent in Hamilton Home, for helping him prepare to become a man by giving him some of what he missed growing up without a father.

“They’ve taught me so much, but more importantly, they have become really genuine friends I know I’ll always have,” Devon said.