Alexis: There’s a reason for everything

“
Being at Boys Ranch showed me that I can trust people, that people do have good intentions. Not everyone is out to get me, which is how I was feeling for a really long time.

Alexis was in her teens before she found out she was adopted.

The discovery came as a shock. Years later, there’s still a tinge of pain in Alexis’ voice at the memory.

“I was old enough,” she reflected.

Alexis reacted strongly to her discovery. It was the latest in a series of final straws in her tense father-daughter relationship. The two had never really connected like either would’ve liked. Alexis was on an age-inspired emotional roller coaster. Regardless of the intentions Alexis and her father brought to their interactions, father and daughter couldn’t find a way to connect.

There was one thing, however, they both clearly understood: Alexis and her father needed help. They found it at Cal Farley’s Boys Ranch.

“I wasn’t happy about it at all,” Alexis admitted, looking back on the events that led her to Boys Ranch. “But, my time at Boys Ranch really did help me. I’m thankful my dad sent me there.”

At Boys Ranch, Alexis found the emotional support and acceptance she so desperately wanted at home.

“I had a lack of trust with everything — family, friends, guys — because of some of the things I’d been through,” Alexis explained. “Being at Boys Ranch showed me that I can trust people, that people do have good intentions. Not everyone is out to get me, which is how I was feeling for a really long time.”

It was through this newfound trust that Alexis found a support base of support at Cal Farley’s.

“I never felt alone there. I knew there was always someone to talk to,” Alexis said. “I built a lot of really good relationships with the adults there. I’ve made a lot of lifelong friends; I still talk to them regularly.”

The connection Alexis maintains with Don and Jennifer Hipp is one of those enduring relationships. Now a junior at the University of South Alabama, Alexis still relies on this staff couple for advice and direction.

“I’m interested in psychology and becoming a therapist because, with a lot of the stuff I’ve been through, I can easily relate to people,” Alexis said. “The Hipps actually are the ones who helped me realize that.” 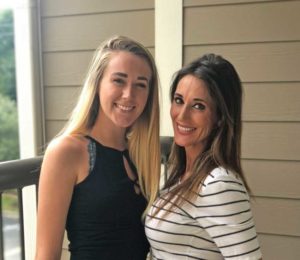 Alexis remembered fondly how Mr. Hipp, once her experiential learning mentor, was so upbeat. No matter the circumstance, he could always lighten her mood. On the other hand, Mrs. Hipp, a chaplain at that time, was her confidant, the one person she could trust to tell anything.

“Mrs. Hipp and I would go on these really long drives and talk about life and my relationship with God,” Alexis recalled. “She always reminded me I’m not alone.”

For Alexis, realizing God unconditionally loves and accepts her has proven to be the most important, lasting takeaway from her days at Cal Farley’s Boys Ranch.

“If someone makes me feel like I’m not good enough, I just remind myself that God is there no matter what. As long as I can fall back on God and that relationship, it’ll all be fine,” Alexis said with confidence. “I didn’t fully understand that until I got to Boys Ranch.”

Like anyone, Alexis still faces the occasional struggle. Her life isn’t perfect. But Alexis is grounded in a faith that reassures her she doesn’t have to be.

“There’s a reason for everything,” she said. “God never gives you more than you can handle.”