The teenage girl contemplated deeply before she took a felt-tip pen and printed some words on the oblong stone. In her quick handwriting, she wrote, ‘help my family be better.’ With that, she gently placed it onto an almost waist-high pile of similarly marked stones.

Each stone, smoothed by years of wind and water, bore the heartfelt concerns of young men and women just like Ryleigh.

She was taking part in a weekly prayer ride, a practice that has been part of the chapel program at Cal Farley’s Boys Ranch for 12 years now. Prayer rides are open to home groups and individual youth during the spring to fall seasons. These early evening horseback outings bring children and trusted adults together for a very unique two-hour experience. 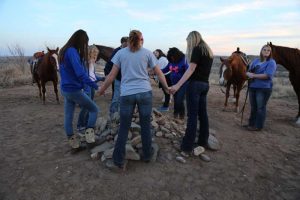 Senior Chaplain Mike Wilhelm, along with a team of chaplains and interns, is responsible for the spiritual nourishment of Boys Ranch residents and staff, said these rides help young people know they are connected to something bigger than themselves.

“Rituals like this are extremely important for us all,” explained Wilhelm, who personally participates in the majority of the prayer rides. “By riding horseback to Magenta, to ‘The Edge of the World,’ this ritual connects us with our heritage at Boys Ranch. We realize we belong.”

Magenta was once an Old West town in Oldham County, Texas. It competed with nearby Tascosa, the site of modern-day Boys Ranch for population, livestock and all-important railroad traffic. Today, virtually all that remains is a large expanse of prairie grass and mesquite on the Westernmost outskirts of Boys Ranch. Here, beautiful hills and draws tower over the shimmering Canadian River valley below. The Edge of the World, a breathtaking river overlook, was aptly named by youth living on the ranch when the prayer rides first began.

Before the prayer ride begins, the horse-barn crew assigns an adult mentor to join Wilhelm in leading the event. This crew ensures enough horses are bridled and saddled, one for each participant, ready and waiting for the children’s arrival. When the prayer ride group arrives, everyone is matched to a four-legged friend. As they prepare to leave the barn, a scripture card is given to each rider.

Prayer rides serve as a simple, no-pressur opportunity for participants to connect with God, should they choose to take advantage of it.

“We don’t have a goal or agenda,” with these rides, Wilhelm said, citing Paul’s declaration in Second Corinthians 5:14-15. “We do it simply because Christ’s love compels us.”

The group leaves the barn, headed slowly west into the setting sun. The two-mile ride itself is filled with the charm of Western folklore. Each rider may meander his or her own way up the trail. As they near their destination, the group forms a single line and observes a respectful grand silence the final half-mile of the journey.

At Edge of the World, each rider quietly dismounts and begins a quiet time of reflection.

Finally, it is here the youngsters are invited to write their concerns, cares or prayers on a stone. Each places his or hers on top of a pile of other rocks left behind by youth who have made this journey before.

The act of writing down their burdens, then leaving them behind, carries great symbolism: Each care is left, proverbially, at God’s feet. The Edge of the World offers each visitor a precious gift: a desperately needed sense of freedom and renewal.

“Our prayer ride,” Wilhelm explained, “can often work as a remedy for arrested spiritual development. The ride tends to baptize the imagination where belief suddenly becomes possible. There is an astonishing cathedral over there on Magenta, but most of the time it remains cloaked from view. You could say the ride ritual helps adjust our vision.” 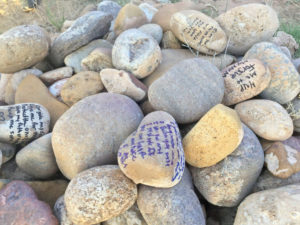 Before leaving the site, the group joins in prayer over the pile of stones and sings Amazing Grace.

As the sun dips behind the horizon, the riders make the trip back to the barn. As darkness arrives, each child vies to spot the first star in the night sky with fresh optimism.

Boys Ranch alumni often recall the prayer rides they participated in as among their most favorite memories. For some, it was the ride that opened the door wide for them in their journey to become born again.

“All are welcome to participate in a prayer ride, believers and agnostics alike,” said Wilhelm. “The consistency of any common ritual is peace-bringing, and this can be like oxygen for those who are weary and heavy-laden, which many of our children are.”