Every great journey begins with a single step!

Eight young ladies who live at Cal Farley’s Boys Ranch recently enjoyed a beautiful journey — a 12.5-mile hike to the top of New Mexico’s Wheeler Peak and back down — making them the first all-female group from Boys Ranch to scale the summit!

More importantly, this special outing delivered all six elements of Cal Farley’s Model of Leadership & Service©: safety, power, purpose, belonging, achievement and adventure! Boys Ranch’s childcare experts know when a child has these six things, he or she is best able to achieve their God-given potential.

The eight young ladies were accompanied by Romersi One houseparent Joe Murphy; Luke Benton, administrator of adventure-based services at Boys Ranch; and Caitlyn Colbert, a chapel-immersion program specialist. The three-night, four-day camping trip brought the young ladies, all ages 14 to 17, and their chaperones, together for some incredible adventure and valuable bonding experiences. 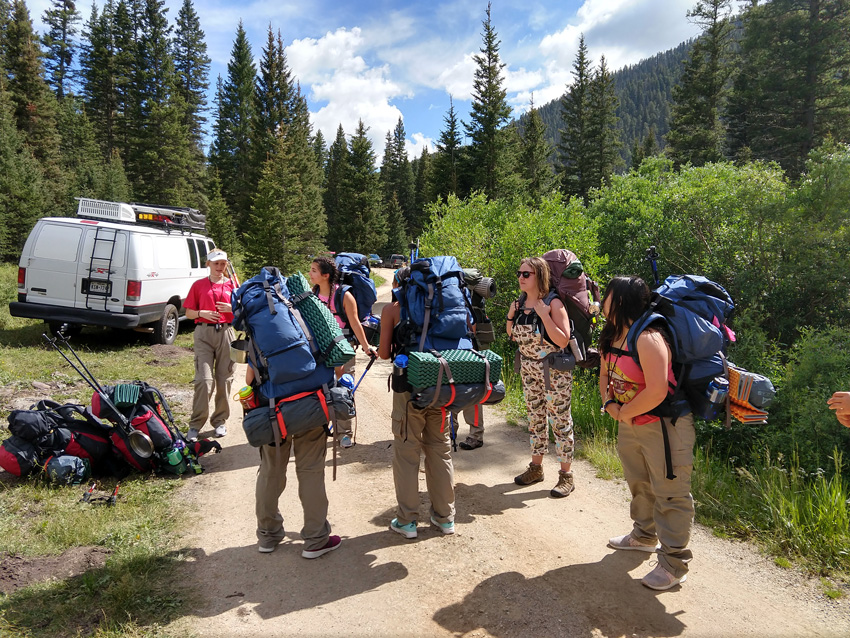 “We wanted them to enjoy and appreciate nature. And, we wanted to prove to them they are stronger than they think they are, hoping that later in life, they remember this,” Murphy explained.

At 13,161 feet above sea level, Wheeler Peak is the highest mountain in New Mexico located in Carson National Forest near Taos. Other Boys Ranch youth and adults have hiked in the area, and some have made it to the summit. This, however, was the first time for an all-girl group to set a goal to reach the summit — and make it happen!

The first day, the group arrived at the trailhead in the late afternoon. They immediately began hiking, with plans to set up tents at one of the first larger campsites just up the trail. Much to their surprise, the first few campsites they came to already were full.

“By the time we got to the first campsite, we were tired and ready to stop,” said Summer, 14. “There were people already there and we knew there were more camps further up, so we just kept hiking for what seemed like forever. It was a good test for us as a group.”

This meant they had to continue hiking four additional miles up the mountain, more than halfway to the summit, before they finally found an open site to stay for the night.

Finally, at an open camp, the hikers set up their tents just as the sun was going down on the western horizon. A quick dinner was prepared, and a night’s sleep was appreciated.

The next day after breakfast, the group broke camp to hike up the mountain to Horseshoe Lake. Here, they set up a base camp directly below the summit.

“The afternoon was spent resting, playing in the snow, viewing some wildlife, playing some games, preparing the evening meal, devotions, conversing as a group and building community,” said Benton.

“One of the memories I’ll always keep is our game of spoons,” said Adaesha, 17. “One evening we were playing cards, but we didn’t have metal spoons, so we used rocks instead! It was so much fun, just a different experience I’ll always remember.”

On the third morning, the hikers got an early start and began the upward trek to the top. The group’s rule from the start was “where one goes, we all go.” Benton said for safety purposes, the group would never split; if one of the girls had said she wanted to stop the whole group would have stopped.

But, that didn’t happen.

“This group of young ladies was determined to make the summit together,” Benton said, “It was really cool how they encouraged and kept everyone focused on the goal.”

“When I wanted to quit, I had to tell myself ‘no, you can do this, you’ve got this’,” said Adaesha, who is thinking about entering the Navy after she graduates in 2020. “This trip taught me to self-encourage at the same time I was encouraging others.”

The girls’ camaraderie was encouraging to their housefather, too.

“These girls were singing while they were hiking,” said Murphy. “It was great listening to them encourage each other at the same time they were pushing themselves. It was just amazing!” 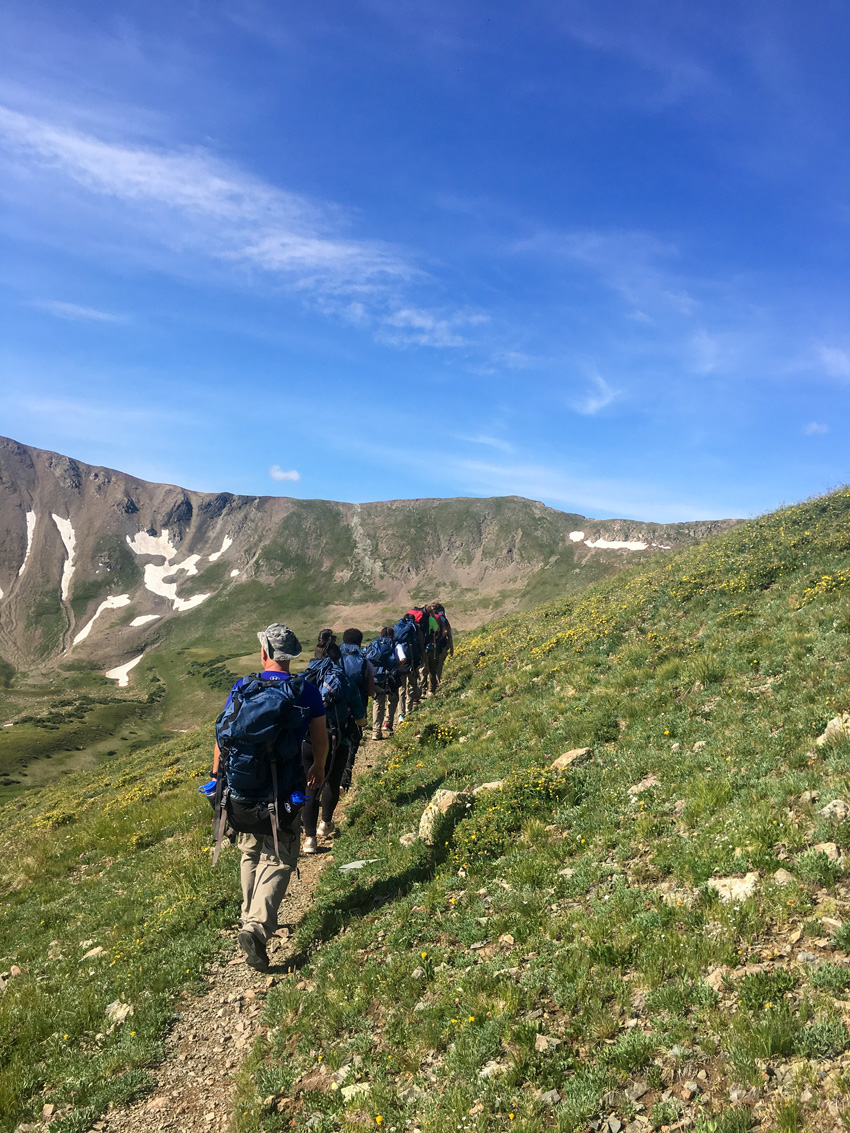 In the highest, steepest areas, some of the girls slipped on the rocks, and the elevation began taking its toll. But helping hands and loving encouragement prevailed. Everyone encouraged each other and helped one another in this last, difficult phase of the climb.

The group arrived at the summit and the victory celebration began! Many pictures were taken. Hugs were shared. A small lunch was enjoyed, along with the astonishing view. A ceremonial rock was placed on the pile of stones made by others who have reached the top.

“I grew a lot from this hike,” admitted Summer. “I understand now that I can do anything, because this felt impossible with the bags and the rocky hike, but I made it. I can do anything I put my mind to!”

“If I can carry a heavy backpack on my shoulders and hike 10 miles up a mountain, I can do anything,” she beamed. “Pushing through the pain made me feel stronger and gave me hope. I’m stronger than I think.” 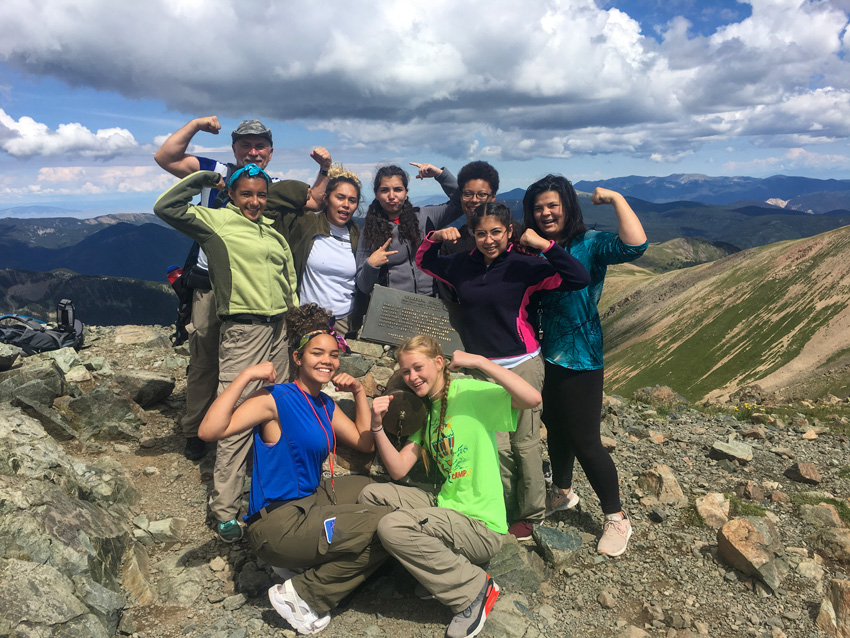 The group ascended from the summit, returning back to base camp for one more night’s stay before returning home.

Throughout the trip, the hikers had experienced temperature fluctuations, some as low as 40 degrees. The last night on the mountain brought high winds just before midnight, some reaching 55 miles per hour.

“The kids did awesome,” Benton said. “At first, they yelled out, but when we assured them they were safe and needed to stay in their tents, they calmed down and trusted the gear. In the gusts, the tents laid over flat on the sleeping campers — as they are designed to do — then would pop back up once the wind stops. We have invested in good equipment and the tents stayed together and kept the girls dry and warm.”

Murphy added that among the lessons learned during the trip, was one of trust.

Even during this storm, the young ladies trusted Mr. Benton and me to keep them safe,” he said. 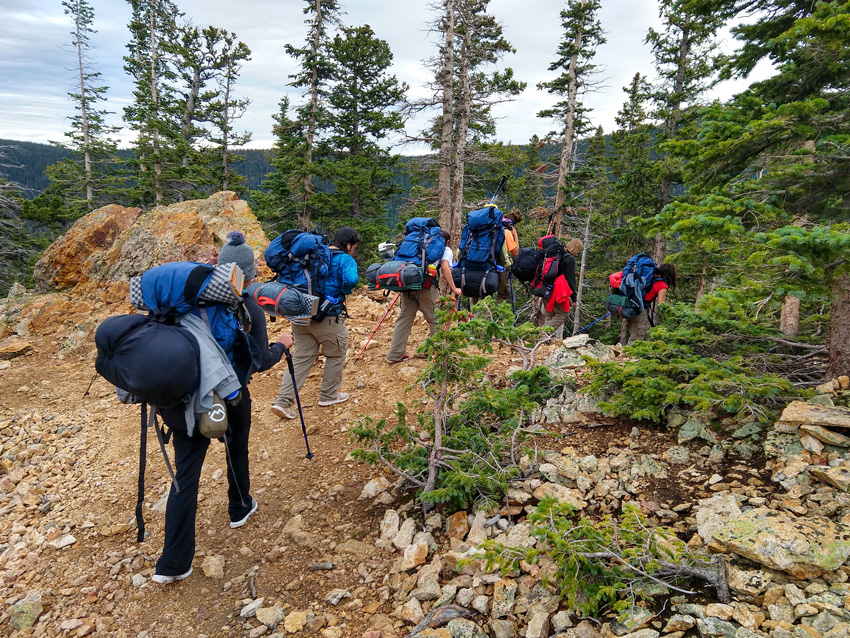 It was a whirlwind night, but it did not wilt the group’s enthusiasm and joy for what they had accomplished hours before. The ladies emerged in the morning sun to breakfast being served. Soon, the camp was dismantled, backpacks loaded, and the trip home began.

The four-plus mile trip down the mountain to the trailhead where the vans were parked was completed before lunch.

The group dined in a nearby eatery, a bit of a reward after three days of camp cuisine.

“The burger at the bottom was the best burger I’ve ever had,” announced Keaira.

The young ladies returned to Boys Ranch delighted for having reached their goal to summit Wheeler Peak.

We’re excited to see what these young ladies decide to do next!