At Boys Ranch, we occasionally tell our youth that the sky is the limit when it comes to their futures.

Through the Experiential Learning Program, our residents design, build and launch high-altitude single- and two-stage rockets that reach tens of thousands of feet in altitude. In fact, Boys Ranch is one a few sites in the United States with a 50,000-foot or greater altitude-restriction waiver from the Federal Aviation Administration.

With this designation, other rocketry programs ask to come to Boys Ranch to launch their rockets. Last week, for the second year in a row, a group of engineering students from Texas Tech University in Lubbock, Texas, came here to launch Matador One.

The Tech students, or “Space Raiders” as they call themselves, are part of a national competitive rocket team. They design rockets following requirements set by the National Aeronautics and Space Administration and now look to Boys Ranch as the place to launch their preliminary “sub-scale” designs. 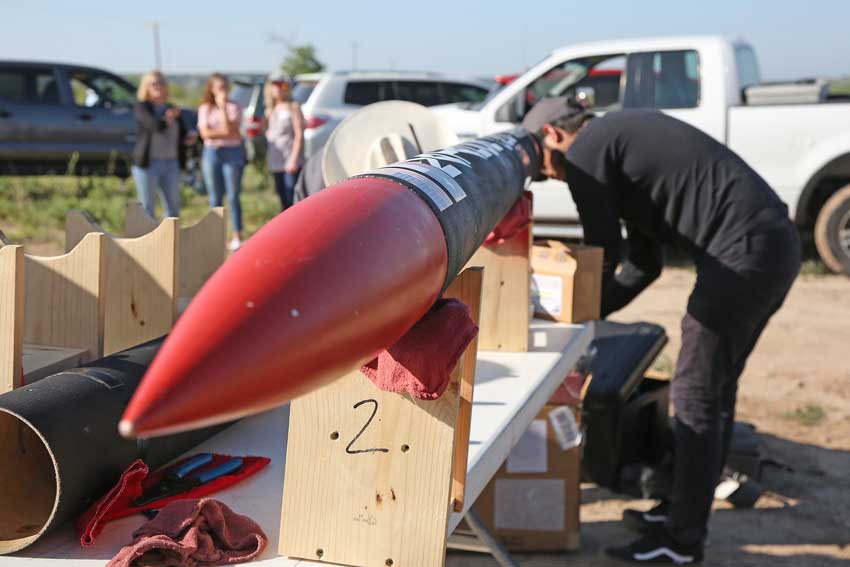 Comprised of primarily seniors and graduate students, the Spaceraiders are almost all mechanical engineering students. Matador One, their latest rocket, was a 13-and-a-half-foot design with a 6.25 inch diameter, twice as big as the rocket they launched last year. It weighed 75 pounds fully loaded and according to the students, had horsepower measuring upwards of 46,000 near the burnout phase.

This student launch initiative served as the final project for these students as they ended spring semester at Tech.

The students indicated they had more than 9,000 man hours in the research, planning, designing, construction and launching of Matador One, which had an estimated build cost of $7,000.

As the students assembled the rocket onsite, some meticulously placed the motor in the casing while others carefully folded parachutes to fit exactly right.

“The payload on this rocket is priceless,” said Cesar Rocha, of Kaufmann, Texas, a senior who has accepted a job as a flight controller position with NASA.

Payload refers to what is being carried on the rocket when it travels into space.

“They were testing the survivability of microfluidic plates (glass plates made to hold microorganisms) for a future NASA mission to Enceladus, one of Saturn’s moons,” explained Boys Ranch Emerging Technology Coordinator Barre’ Wheatley, who teaches rocketry at Boys Ranch, and who was on hand to help supervise the rocket launch.

“They had a sensitive accelerometer to measure the shock, vibration and force the plates experienced. This would allow them to determine the force the plates could take and what might break them,” Wheatly said.

Wheatley said that the rocket did reach an altitude of about 12,700 feet. He said there were some problems with the launch which later became teachable moments. The main parachute did not deploy because the motor section was lost in flight, for example.

“Tech will be able to determine exactly when the part broke once they analyze their flight data.”

The Tech students were quick to say that the work Wheatly is doing with the youth and rocketry here advanced far beyond what they are doing in Lubbock.

“Mr. Wheatly is an incredible instructor and a fabulous mentor,” said Edward Hieb, a senior from Dallas. “Being here with him allows us to pick up little things, important things, that we will never learn reading a textbook.”

According to Wheatley, Boys Ranch has to renew its waiver every year with the FAA. The current Boys Ranch FAA waiver allows rockets to be launched up to 55,000 feet and land within a 4 nautical mile radius of the launch site