Boys Ranch house mother Sandra Pape called out the window of the van parked along the obstacle route. She was cheering on Yuri, 11, a young girl who just two weeks prior, began her journey at Cal Farley’s Boys Ranch.

Yuri (pronounced Yudy) was courageous when she signed up for the challenge, perhaps not fully realizing what she’d gotten herself into. She had just made it across the rope wall, no easy task an and now she was crawling on her belly through mud.

One by one, or few by few, young people participating in the annual Boys Ranch Gauntlet obstacle course rounded the bend, climbed up the slippery wall, headed for the first of four mud crawls. The two-mile course peppered with obstacles requiring feats of strength and dexterity certainly fulfilled the participants’ innate human need for adventure! 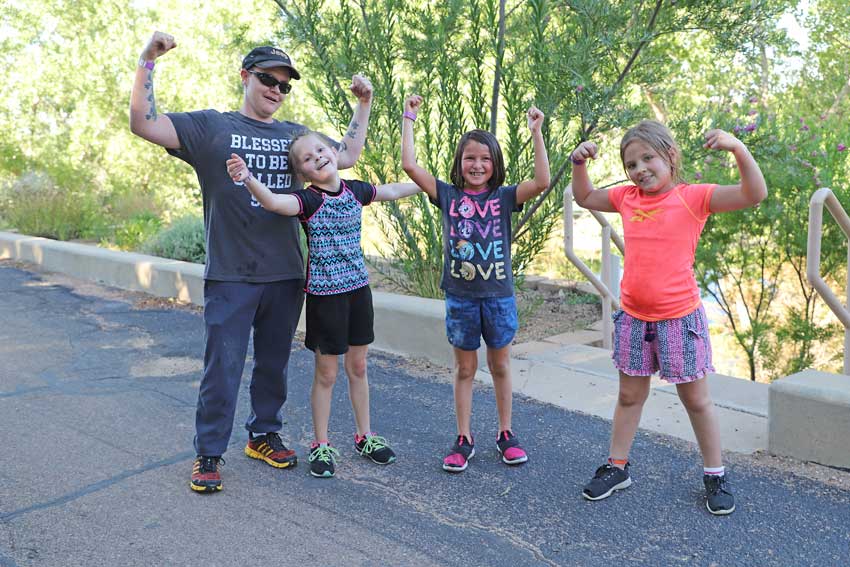 In many cases, adult mentors such as house parents, coaches and youth workers were covering the course alongside the boys and girls. They encouraged them to keep going and offered a helping hand in a hard spot, anything to make sure everyone crossed the finish line to celebrate success.

Yuri was never alone. She started the course with several of her home’s residents, led by house father Randy Todd who saw her through more than half of the race. Participants may finish the course at their own pace. Another house father, Wade Wilsher, who wasn’t in a big hurry, was helping Yuri and a few other children get through some of the tougher obstacles, slowly, but surely.

Boys Ranch believes adventure is a necessity, so much so that it is one of six universal needs in the organization’s Model of Leadership & Service.

The Boys Ranch Gauntlet, now in its third year, is not a race, but rather a challenge. It is designed to allow everyone ages 5 and up, of all athletic abilities, to complete the course on their own time. All participants are encouraged to do their personal best, to overcome the obstacles rather than skip them.

“It was so much fun, I loved going through the mud!” said Yuri. “That slick wall was the hardest, I didn’t want to die, it was so slippery! All of us in our group ended up walking around it, but we did everything else.”

Luke, 13, admitted he struggled with the slick wall, an inclined wooden wall covered with kitchen shortening.

His housemate Colton, 17, said he enjoyed every part of the race.

“I tried to get as muddy as possible,” he admitted. “I just love mud! This was one time when no one could tell me ‘no’, so I had a blast!”

He said he especially loved it when the fire department was spraying more water into the muddy spots.

One of the most popular obstacles was called Hercules, where a team of people had to come together to successfully pull a several-hundred-pound concrete weight high into the air using a rope and pulley system, then lower it back to the ground.

“That was the most fun this year,” said Isaiah, 15. “It was way heavier than it was last year, so it took a bunch of us coming together to do it.”