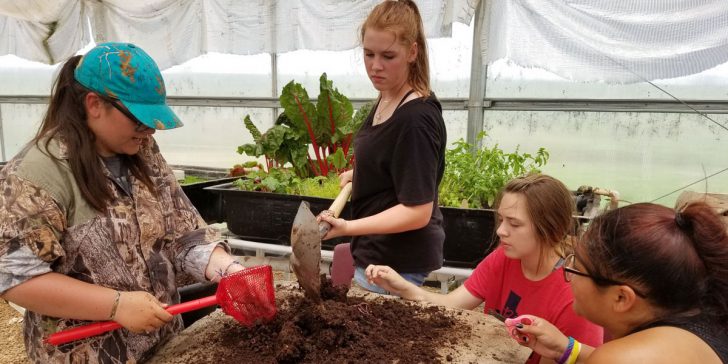 The Community Garden at Boys Ranch is a place of solitude where young people find therapeutic interaction with animals, plants and nature. Children visit the area often, to love on a goat, hold a chicken, or pluck a tomato off the vine. Some youth help with the upkeep of the garden as part of their Experiential Learning Program training. 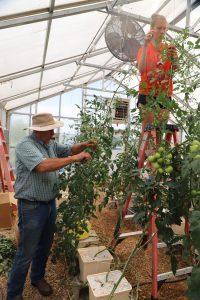 Twice a year, the soil in the worm composting operations, also known as the worm bin, must be refreshed.

Recently, four of our young ladies took on the task.

Several shovel loads of dirt at a time — from the worm bin — are put on a plywood table. Eight hands begin stirring it around to find the red wigglers and put them in a separate container. The remaining dirt goes into a wheel barrel, soon to be used as fertilizer in various flowerbeds at the ranch. 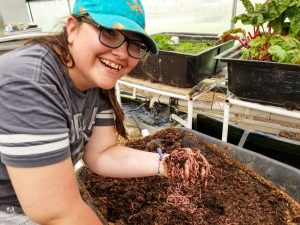 “They don’t bother me, I’ve done this before,” she says matter of fact.

“They are disgusting,” says Calesse turning up her lip as she tossed a worm into the tank where a little black fish gobbled it up.

Jewel and Hailey hesitate, then stick their hands in the dirt and help with the sorting work.

While worms would make some squirm, these four know the vital role they play in the overall greenhouse operation. An estimated one thousand worms get gathered up to be put back in the bin to help renew another bath of soil. 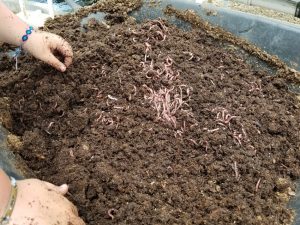 The important cycle of the greenhouse begins again. Vegetable clippings are put in the worm bin. The worms eat this waste and turn it into castings and liquid fertilizer.

Like the composting bin, other systems within the Community Garden provide important support to growing vegetation. When the worms and fish food are fed to the fish living in the indoor aquaculture tank, the waste from the fish sinks to the bottom of the tank and is collected by a filter system where it eventually is processed and becomes nutrient rich food to be put back into the indoor plants.

Residents on campus visit the greenhouses to pick fresh produce including tomatoes, kale, lettuce, chard, peppers and even strawberries.

The youth who get to help grow, harvest and eat from the plants in the Community Garden have a great opportunity to learn about different ways to raise food.