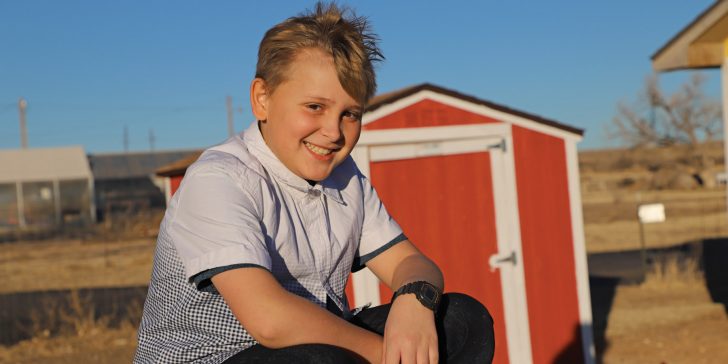 William’s dimples dance and his eyes light up when he talks about two of his most favorite things — hanging out with his friends and playing football. He gets to do both frequently on the grass patch across from Edwards Home in the pre-adolescent community at Cal Farley’s Boys Ranch.

Like most 11-year-olds, William is exploring many aspects of life. Boys Ranch is proving to be the perfect place for him to do it. He has found a place where he feels he really belongs.

Here, insecurities that often taunt others his age, simply don’t occupy his time.

“I’m always busy here and I have made lots of friends,” William shared.

Good houseparents, he said, have helped him have a good experience.

“They treat me like a regular kid. There are more rules here, but I’ve learned that the rules are important because they keep us safe.”

William didn’t always feel safe. Like many of our children, he came from a fractured family. His mom and dad never married. He has six half-siblings, and until he was four, he lived with his mom and four of his brothers and sisters. Mom frequently relocated and moved from job to job. William often didn’t know where he’d be sleeping from one night to the next. Afraid for his safety, William’s dad and stepmom took the necessary steps to get custody of him.

Moving in with a father he’d had only minimal contact with, and a stepmom who, for the most part, was a total stranger, plus a new baby brother, was hard for William. His stay-at-home stepmom became his primary disciplinarian.

William desperately missed his mother and his siblings and felt they were being pushed even further out of his life. It didn’t help that for months after he moved in with his dad, he had no contact with his mom.

Looking back, William says the confusion he felt turned him into a bit of a monster. William began living a reckless life, destroying his own toys, taking things that were not his, lying and being physically aggressive with others. He was crying out for help, using actions instead of words.

William’s parents knew he needed help. At the time, though, all William wanted was an escape, he didn’t really care where it was, so long as it was away. He agreed with his parents when they suggested the family reach out to Boys Ranch.

“I came and toured in January and I really wanted to come here but I couldn’t because there was not a bed for me at the time,” recalled William.

The demand is often greater than the space available for hurting children.

“In June, they called and let us know they could take me, so I came right at the start of summer, on June 15,” William said.

Like many children who live here, his exact move-in date is engrained in his mind.

This bright-eyed boy has grown tremendously since he’s been here. He’s learned about taking personal responsibility for himself, about setting and reaching behavior goals, and what it means to really be part of a team. William has benefitted from group counseling, consistent rules, set schedules and positive peer relationships. He’s found many opportunities for success academically and adventurously.

The community garden is one of his favorite places to destress. He loves interacting with the chickens and the goats.

“I’m learning how to control my anger, to calm down and talk to someone about it,” William said, adding, “I don’t have much time to get angry anymore. I’m pretty busy.”

“I go there twice a week and I got to make a castle on the 3D printer and I really loved that. I hope I get to do more things like that,” he said.

“It’s the place where you can talk to all your friends. I feel like I’m part of a huge family when I go in there.”

This summer, he looks forward to fishing. He has a goal of re-catching the two-foot long catfish he threw back in 2019.

In recent months, William has enjoyed some home visits and has been able to see his mom on several occasions. She is in a better place right now to care for him. He hopes to live with her again one day.

But, for now, he’s very content with the sense of belonging he’s found in the safety of a group home at Boys Ranch.

“I’d tell another kid that they can come here and be okay, it’s a good place,” William said.

← Elvis: Faith and confidence for his future
President’s Message: The importance of community →