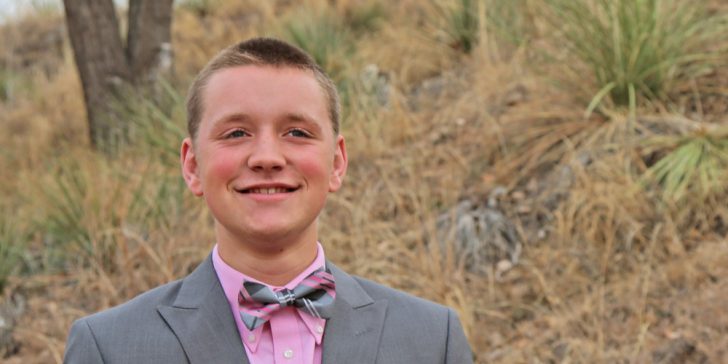 The young man carefully eyed the gleaming object in front of him. Its glossy blue surface reflected the light like a finely polished mirror. Even the slightest imperfection would be only too easy to spot.

As the smile on his face grew, reflecting a job well done, Taylor wiped away a speck of dust from the truck hood to which he’d devoted countless hours of learning and practice.

Like many young people at Cal Farley’s, Taylor participates in the Experiential Learning Program, which exposes our youth to a wide range of vocational fields, including automotive repair. In E.L.P., Cal Farley’s youth get hands-on preparation for potential careers and build positive mentoring relationships.

Taylor chose to study at the Boys Ranch campus body shop, which he said is a perfect metaphor for his life.

“My ‘car’ started out as a crumpled up piece of metal in the shape of a ball,” he said. “As I’ve progressed, it’s (become) a nice, luxurious car that’s going to last.”

The hood project Taylor admired with such satisfaction is just one tangible example of the success he’s has found at Cal Farley’s. From his first day on campus, Taylor has gained the emotional and practical tools he needs to succeed in life.

“I started learning and learning … If you don’t try, you’re not going to get anywhere,” he said.

That attitude has helped Taylor in school, where he’s found a success that eluded him before Cal Farley’s. It’s also given him the determination to apply what he’s learned in his E.L.P. position.

“(My E.L.P. mentor) found this old truck hood, and he took this sledgehammer and put two huge dents in it — right on the body line! I had to take them out all by myself. It was a tremendous success.”

Taylor enjoys learning skills he could potentially put to practical use in a job one day. But, he said he’s gained something else from his time at Cal Farley’s, something far more valuable — a positive connection to other people.

“You learn how to work together,” he said.

“
“My ‘car’ started out as a crumpled up piece of metal in the shape of a ball,” he said. “As I’ve progressed, it’s (become) a nice, luxurious car that’s going to last.”

Such successes once was hard to imagine for Taylor.

His parents hadn’t provided the care he needed and Taylor was often alone and isolated. Eventually, Taylor was removed from his home and, at just six years old, he was adopted by his great aunt and uncle. Until then, Taylor hadn’t regularly attended kindergarten. He was nearly seven years old before starting school.

“It was just an adjustment period,” Taylor said, reflecting on the sudden change in his life.

A new home, new school, new routine — it was quite the challenge. He struggled in school, and was even diagnosed with dyslexia. Taylor had to work harder than some of his peers to keep up, but his teachers helped him find ways to understand his lessons. The hardest part for him, though, was relating to other children.

“I started being bullied at school, and I didn’t know what to do. I didn’t even (understand) what it was at first,” he said.

In the years that followed, Taylor endured increasing bullying, trying even harder to prove his naysayers wrong. He settled into his new family, eventually coming to call his great aunt and uncle “Mom” and “Dad” and viewing the family’s black Labrador retriever, Ranger, as his best friend.

“It went all the way up through elementary,” Taylor said. “I struggled a lot because I had the lowest reading level and the lowest grades (in my class).”

Matters grew worse, though, when Taylor entered middle school. Administrators at the school told Taylor’s family they couldn’t provide him the same level of help he’d had when he was younger unless he was enrolled in a special-education class — a change everyone agreed went beyond Taylor’s needs.

“My grades just kept getting lower and lower. I finally hit rock bottom. I had an F in every class,” Taylor remembered.

Taylor was reaching his breaking point. He thought about the things he’d endured with his biological parents. He considered his struggles at school, and his failure to make friends. The more he thought over those things, the angrier he became.

Taylor didn’t mean to take things out on his parents. He knew how much they loved him.

But, of course, Taylor didn’t feel better at all.

One day, Taylor’s dad handed him a magazine, The Roundup.

Inside, Taylor read the story of twin brothers, and how they found a second chance at a place called Cal Farley’s.

“They had the same problems I had,” Taylor recalled. “I said, ‘Dad, I want to go to this place!’ He asked me: ‘Are you sure?’ I said, ‘They have the help and stability I need.’

HELP AND STABILITY THAT LASTS

Five years later, help and stability are exactly what Taylor has found at Cal Farley’s. Right from the start, he saw genuine concern from everyone around him. He grew close to Cal Farley’s senior chaplain, sharing a number of talks which Taylor credits with opening his mind to allow God to be an important part of his life.

Whether he is talking with his house parents, teachers, a chaplain or, in recent years, his E.L.P. mentor, Taylor found someone easy to talk to and who wanted to help with his problems. He’s learned to keep his anger in check, and how to channel his frustrations into productive activities.

And, those low grades that plagued him for so long?

“Ten thousand times better,” Taylor beamed. “I work hard … I might not be the smartest kid … but I make the highest grades.”

When Taylor graduates from high school this spring, he’ll do so with a profound sense of accomplishment. He plans to attend college in the fall, and when he does, he’ll take with him a wealth of knowledge and life skills gained at Cal Farley’s.

He’ll also have the practical skills to sustain himself in a career. Taylor’s involvement in E.L.P. has allowed him to earn a number of professional certifications that will increase his value to a potential employer.

“With these certifications, I could work at a lot of places,” Taylor said.

Summing up his Cal Farley’s experience, Taylor again compared his life to the E.L.P. projects he’s been involved with.

“Life’s kind of like a car,” he said. “In life, you break down, just like a car breaks down. But, you can always fix it.”

← Zayne: Building a giver’s heart
What is experiential learning? →