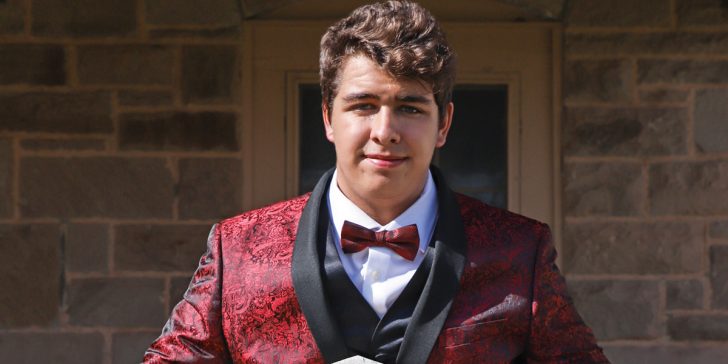 A move from the big city to a small rural town was an adjustment for Stephen, just entering his high school years. His family home-schooled yet made sure he and his siblings had plenty of positive social opportunities. Even so, Stephen still decided to choose a path of mischief.

“The law knew my name, and it wasn’t going to be long before I would have ended up in juvie or something,” Stephen remembered.

Stephen isn’t proud of his past. He is instead very thankful for Boys Ranch — also a small town, but one that is helping him turn his life around. For Christmas, he looks forward to spending time with his family to celebrate Jesus’ birthday.

“We do not open our gifts until New Year’s Day. We’ve always said Christmas is Jesus’ birthday,” Stephen explained, adding his family believes in keeping the focus solely on Jesus that day. “My mom makes a huge cake, and we each are assigned a section of it to decorate. We watch The Nativity movie and eat birthday cake.”

Stephen is excited about seeing his many siblings, which include a biological brother and sister, who were adopted at the same time as Stephen in 2006. He also has two younger half-brothers who were adopted in 2018.

At age 17, Stephen falls right in the middle of this large brood. Big families have big dynamics.

“I had two older brothers who had both moved out,” he explained. “They weren’t the best influence when I was nine.”

In 2016, Stephen’s parents moved from Raleigh, N.C., to a small town in the middle of Kansas. Unhappy with his new address, Stephen grew increasingly defiant — and girl crazy. He began running out, finding bad company, experimenting with drugs and having angry outbursts when his parents set limits to try and redirect his behavior. Once a good student, his school performance suddenly plummeted.

“When I first got here, I was a whole year behind in school,” Stephen recalled.

During his interview process, he was told about the credit-recovery program at Boys Ranch Independent School District and the opportunity he would have to get back on grade level.

“Before summer started, I asked if I could work ahead and get on schedule with the rest of the seniors. I did my whole junior year in the summer.”

Motivated to reunite with his family, Stephen did the work necessary to finish his senior year in one semester. He graduates in December.

Stephen credits his success to the influence his house dad, Allen Wallace, has had on him. Three words: new work ethic.

“I had no motivation, especially when it came to school. Mr. Wallace taught me to do my best all of the time and that’s one of the reasons I was able to get the schooling done,” Stephen said. “It is something I can use in all things.”

“When I first got to Boys Ranch, I wasn’t the greatest kid. I didn’t like the rules. I ran out all of the time, kept getting caught up in the wrong situations. Mr. Wallace helped me through some stuff and I’ve tried to keep out of trouble.”

Stephen has played basketball, and worked in the campus transportation department, learning valuable skills through the Experiential Learning Program.

Allen Wallace said Stephen’s whole focus since upon his arrival was to gain an understanding how to improve himself to contribute more positively within his family circle, or life in general.

“One of our main conversations was about distractions that can be obstacles in getting out of Boys Ranch and getting home to his family,” said Wallace. “I watched him take his schooling more serious and think more about some of his decisions. He has learned to control his anger better, but he’s not perfect. Overcoming our emotions is a lifetime journey.”

He said he is making some honest effort to know God better. Wallace has helped him know God as a friend, rather than Someone to fear.

There’s no place for fear in Stephen’s life now. He’s headed in a more positive direction and Boys Ranch paved the way for this change.

← Jonathan: A journey of unexpected joy
Gift wrapping a tradition of love →