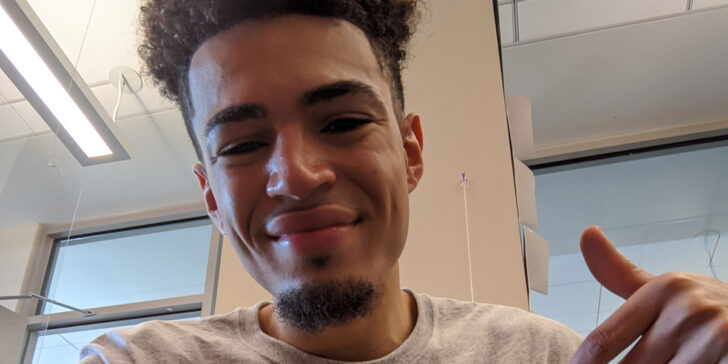 It was 2013 when Nicholas, then 14, arrived at Cal Farley’s Boys Ranch. Hailing from Brooklyn, N.Y., Nicholas, who goes by Nicoh, was every bit the proverbial fish out of water. He was encountering a new world—one full of new ideas and opportunities different than anything he had ever experienced.

“I really needed to change my life,” said Nicoh, now 21 and a student at the University at Albany in upstate New York.

Nicoh is studying homeland security with an emphasis in emergency preparedness and cyber security. He wants to give back to society through a career in community service. He has worked consistently in his studies to remain eligible for the financial help he’s received each semester. Nicoh is on the dean’s list at Albany, and plans to receive his bachelor’s degree in May 2021.

When Nicoh isn’t in class, he spends his time working at a local pharmacy.

“I’m also doing an unpaid internship at the State of New York’s Department of Motor Vehicles in Albany, where I’m learning how to do field investigations,” he said.

From his home in Schenectady, N.Y., Nicoh takes time away from homework to reflect on his memories of coming to Boys Ranch, and the different path to which that experience led him.

“Prior to Boys Ranch, my behavior wasn’t good at home. I’d lost my way morally and academically,” Nicoh admitted. “I needed help reorganizing my life and making some better life goals.”

At Boys Ranch, he found a structured environment where he learned the value of accountability and self-motivation. The opportunities to do things were endless, and someone always was paying attention to his needs. Nicoh said he felt valued and loved at Boys Ranch.

“Wherever you are in the world, you will find the few people who genuinely and sincerely care about others,” Nicoh said. “I learned a lot, but more than anything, I recognized the importance of education, specifically a college education. I decided that, to have the kind of life I want, I would need to pursue a higher degree.”

Beyond the classroom, Nicoh’s relationship with his parents has improved significantly through the years. He credits his mother for much of his success, as she was the one that found Boys Ranch online and sought to place him here.

“My mother tried to instill in me growing up as a child, how important education is, and this was actually confirmed for me when I was in Texas. Boys Ranch was the awakening point for me, and my mother was the foundation for that awakening point. I always had discipline and structure because of her, I just was not passionate academically and this worried her.”

Nicoh said that at Boys Ranch, he was challenged academically.

“I had passionate teachers and instructors like Brad Miller, and Danny Kauk, who really made me realize the importance of education,” Nicoh said, rolling off a long list of other teachers, coaches and mentors he said profoundly impacted him during his time at Boys Ranch.

As Nicoh entered his senior year, he was especially excited to learn about the Boys Ranch scholarship program and the help it could provide in continuing his education. Boys Ranch helped him graduate high school and, so long as he worked hard in school, it could help him prepare for his chosen career, too!

“I want to pursue a career in government, either a city job, or with Homeland Security or maybe the CIA,” he said.

Whatever Nicoh does, he hopes it will be something that facilitates change and has potential to provide to the betterment of humanity on a global scale.

Nicoh is very grateful for Boys Ranch and for the scholarship that is so crucial to his ability to stay in college.

“I just want to say thank you to the donors. Thank you for funding something so important in my life and that of others!”

← Nicole: A teacher pouring herself into her profession