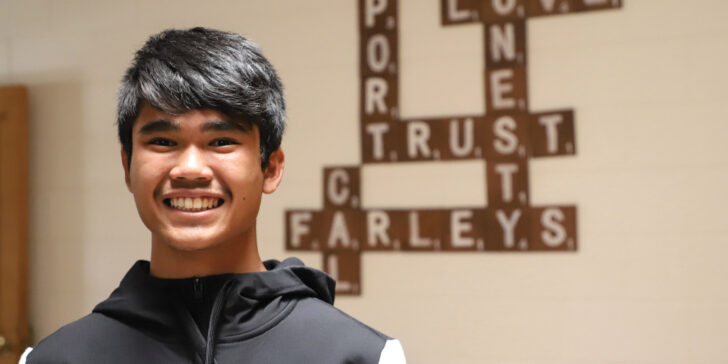 Unable to change his behavior, Lucas turned to Boys Ranch.

It was a hot summer afternoon when Lucas found himself standing on the catwalk behind the rodeo chutes at Boys Ranch’s Marshall Cator Arena. He was about as far away from his comfort zone as he could be.

The straw hat he wore was sitting right on his head, as if it were made just for him. But, today was the first time he’d even tried it on.

“That was interesting,” Lucas said, with a grin on his face. “I hadn’t been at the ranch that long, and some guys in my house were talking about riding broncs after school. They told me I needed to come and check it out, so that’s what I was doing.”

Needless to say, while Lucas was captivated with what he saw, he decided that day he doesn’t want to be a cowboy. But he also realized it pays to check things out.

“Honestly, this is a place that teaches you a lot of good stuff,” Lucas said, adding, “there’s a lot here that can prepare me for the real world to come.”

“
If I listed everyone who has had an impact on me, it would fill an entire book.

Born in the Philippines, Lucas lived in an orphanage until age nine. He was adopted by an American family from North Carolina. He instantly had parents and two older sisters who love him deeply. However, as Lucas entered his teens, he began exhibiting very troubling behaviors.

Prompted by years-old food insecurities, he often stole from the kitchen. It was risky behavior on his part because there are certain foods he can’t safely eat. He found it easy to lie about things he’d done. He developed an I-don’t-care attitude, and made one poor decision after another.

As can be common in adoptions, when basic emotional needs aren’t met during infancy, children will struggle later with close relationships. Such children may be diagnosed as having Reactive Attachment Disorder. Children who have trauma in their lives prior to age five often experience this disorder at some level. R.A.D. indicates an issue with the brain’s emotional development. Such children haven’t experienced the healthy, positive relational moments that provide each of us with the emotional context for what is harmful and what is not. As a result, others often perceive them as lacking concern for how their actions affect those around them.

Boys Ranch chooses not to use labels, but instead looks at each child’s strengths. Our experts build a plan of service based on what the child does well.

Lucas knew he needed help and, when his mother found Boys Ranch, he was agreeable to relocating to Texas. Fortunately, he’s always been very strong academically and excelled in the classroom. What he didn’t know how to do, was how to read other people and to understand how his actions affect them.

Lucas was ready to take on the challenge, it was time to become the responsible young man he was capable of being.

“The adults at Boys Ranch are different. They make me feel like I matter,” he said. “The people here encourage me to strive to be better. Sometimes I don’t feel like doing it, but they make me want to be a better person, so I get up and do it.”

Since his arrival at Boys Ranch, Lucas has learned some valuable life skills. He participated in the Experiential Learning Program with the campus Transportation Department, changing oil and tires and learning other basic automotive skills. He will start another E.L.P. this fall in either the woodshop or the Science Technology, Engineering, Art and Math Lab.

“I’m trying to look for different things here that I can do that will help me in the future,” Lucas explained. “If I had to choose just one, I’d like to be somewhere that I can create stuff.”

He is looking forward to a 3-D printing class this semester and plans to study engineering in college. He’s very motivated by what he knows a college degree can give him.

For now, though, Lucas said living in a house with other boys is teaching him a lot about himself.

“I’ve learned quite a bit about responsibility and how important it is that I take care of my things,” he said. “Boys Ranch has given me more than I ever expected. I’m learning new things, seeing new things. I have more friends than I’ve ever had and certainly more opportunities than I ever imagined.”

While rodeo wasn’t for him, Lucas has been involved in wrestling and plans to play basketball and run cross-country and track this year. The coaches, he said, “teach you as much about life as they do the sport.”

Lucas will never forget the encouragement and kindness he has found in the people at Boys Ranch.

“They’ve taught me to work, to be open-minded and to explore,” he said.

← Alumni: For Tony, giving back is a responsibility
‘Owning’ her past helps Abrial move forward →