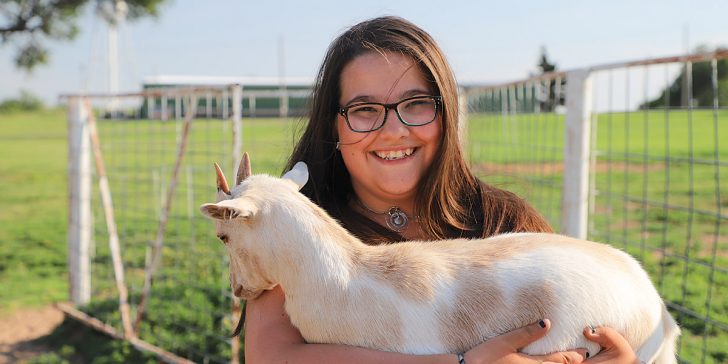 At Boys Ranch, Lexus gains a focus her life was lacking

Having a set schedule to fill her time and direct her energy is part of the therapeutic care Lexus needs and receives at Cal Farley’s Boys Ranch. Her days are filled with Experiential Learning Program and adventure activities, along with educational challenges.

When Lexus came to Boys Ranch three years ago, she was a big handful for her aging, paternal grandparents. Her grandmother is in poor health and her grandpa was extremely aggravated by her behavior. They felt desperate to escape her angry fits.

Like many children who come from difficult backgrounds, Lexus had experienced so much loss in her life, she had begun to choose self-defeating behavior and she was directing it at the people who love her most.

Before Boys Ranch, Lexus spent a lot of time in front of the TV and admits to strategizing ways to create havoc in the home. She was good at manipulating her younger sister to help make it happen.

Lexus’ grandma and grandpa have always been in her life. Her parents never married. As her mom’s struggle with drug addiction became a losing battle, Lexus, then just 3, and her sister moved in with their birth father, who heavily relied on his parents’ help to raise the girls.

When Lexus was 9, her dad got married, and a stepmom entered the picture. The next two years were filled with yelling, slapping, threats and torment. Lexus felt powerless and rejected. Her means of self-preservation was “get them before they get me.”

Her grandma and grandpa once again stepped in, this time gaining full, permanent custody.

Lexus greeted her teenage years with vengeance. Her grandparents knew they needed to find help to raise Lexus and her sister.

“Together, we were just too much for them,” Lexus acknowledged.

She embraced coming to Boys Ranch because in her heart, she knew she needed more structure and someone to hold her accountable for her actions.

At Boys Ranch, Lexus has found a safe and encouraging place to establish new behaviors. Her new sense of empowerment has helped her identify her personal skills, talents and strengths. She’s learning the importance of being self-reliant and empathetic toward others, especially her grandparents.

Journaling, she said, allows her to process her thoughts. It provides a healthy outlet for her feelings.

“I love to write. I’ve been journaling for a long time, a very long time,” Lexus said.

And, if she’s not in the mood to write, she prays. Prayer always helps her work through tough times.

“When she got here, Lexus was very immature, frightened and self-conscious,” said house mom Belinda Allen. “She is now self-assured, a hard worker and shines with talent.”

The progress Lexus has made in our care is exciting. Today, this young lady competently talks about her future. She thinks about becoming a veterinarian and a mother.

“I’d like to adopt some children,” Lexus said, “and live on a big farm with lots of animals.”

← Marcelo: Loving the family that chose him
Tom: Finding faith and a future →