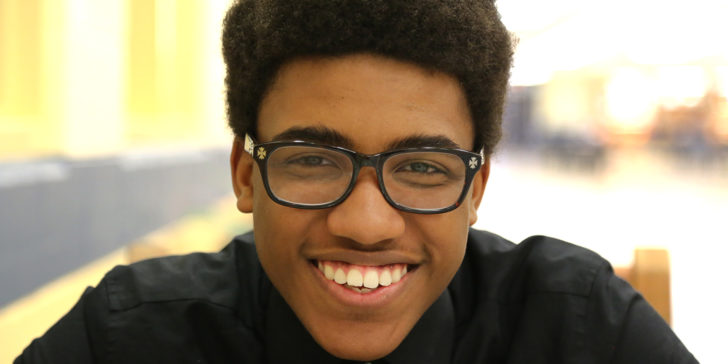 He reached forward, releasing his grip. His teammate dashes off, baton in hand.

“If you’re running a relay, and you’re trying to pass the baton, but the other person doesn’t know what to do, you can communicate your way through it,” Kenneth explained. “If there’s no communication, they’re not going to know what to do. Track has to be a team sport at some point.”

Better communication is a key point of interest for Kenneth’s time at Cal Farley’s. Kenneth, better known as Kenny, is a quiet, introverted young man. With a passion for music, he can spend hours alone listening to different genres on his headphones. Don’t misunderstand — Kenny still enjoys spending time with others. He just keeps to himself, preferring to take it all in rather than projecting outwardly.

An only child to a single, working mom, Kenny felt his “loner” personality trait served him well, allowing him to find contentment during the many hours he had to himself when he was home but his mother was still at work. It may have been a suitable coping mechanism for his often solitary life, but it also allowed communication barriers to crop up between Kenny and the people around him. In his isolation, life lessons on communication took a back seat. This barrier made it hard for Kenny to connect with others, even his own mother. 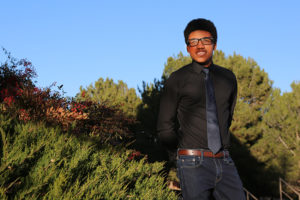 “I was a loner, because I was an only child. You’re just by yourself a lot,” Kenny said. “I’m not really a talkative person, but now I talk a lot more than I used to … At Boys Ranch, I’m in a bigger home with a lot more people. You have to communicate to make things function.”

To manage the large family-like environment at Kenny’s Boys Ranch home, his house parents demonstrate successful communication daily. It’s all part of modeling for Kenny and his peers ways they can be successful in everyday life.

“Every interaction staff have with residents is built toward modeling those social skills … We’re not sitting down and saying ‘today we’re going to work on this social skill,’ but we are saying ‘this is how you perform this social skill,’” explained Michelle Maikoetter, Cal Farley’s chief program officer.

As primary caregivers, the houseparent role is extremely important to each child’s development at Cal Farley’s. Many of our young people arrive at Boys Ranch having missed out on some part of their early social development. Positive, healthy interactions with house parents and other adult mentors help bridge that gap, making up for lost time and providing our youth with real-world instruction they lacked.

“How we become who we are, how we are able to have healthy relationships, all stems from our early relationships. How our caregivers were with us sets the foundation for all those relationships that follow,” Maikoetter explained. “What we’re trying to do is to get some replacement experiences, positive experiences, healthy experiences, so we can help these children rebuild that template of what a relationship is.” 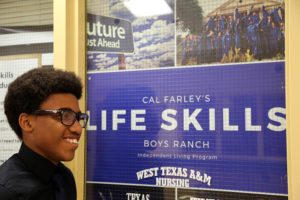 At Cal Farley’s Boys Ranch, our caring mentors look for ways to use each child’s inherent strengths and interests to bolster areas in which there’s room for improvement. We encourage our youth to apply beneficial concepts they’ve learned in one area of life to improve their lives in other areas.

In Kenny’s case, track is a big motivator. It’s an activity he enjoys and feels comfortable doing, so our staff has helped him apply communication and teamwork principles from this activity to his other relationships.

For instance, to excel in a relay race, Kenny knows he must communicate with his teammate as he’s passing the baton. If a communication breakdown occurs, the entire team struggles. This principle perfectly parallels to relationships with family and friends: continued lack of communication between two people puts that healthy relationship at stake. Through his involvement in athletics, Kenny is actually learning communication skills he can apply throughout his life.

Kenny is excited about his future, and working hard to overcome whatever communication hurdles may lie in his path.

“One day, I want to have a functional family,” he said. “I want there to be communication, better communication than what my mom and I have. I want it to get better with her, too.”