Your heart breaks when a boy talks about how insecure and lonely he felt before coming to Cal Farley’s Boys Ranch. “I thought no one really liked me. I wasn’t a kid that someone would hang out with,” Jonathan admits. In fact, he goes on to say, “My older sister used to think I was the worst thing that happened to the family.” 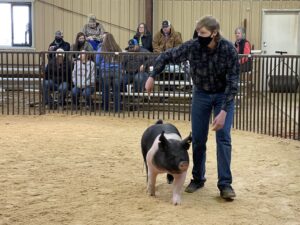 By 11 years of age, Jonathan had alienated himself from his sisters, brother and parents. “Mainly I had a lot of trouble with my family. A lot of trust issues,” he says. “I used to steal from them and lie about it.” The constant strain brought his family to a crisis point. His parents’ marriage, and the entire family, was at risk of falling apart.

“My parents tried many ways to help me, and they just didn’t work. So, they came up with a different solution to help me out.” As a fifth grader, Jonathan came to Boys Ranch for a second chance.

And that’s exactly what Jonathan and his family needed.

Since coming to Boys Ranch, “my life has changed dramatically. My older sister didn’t like me because I was really immature and annoying to her,” Jonathan explains. “Now my relationship with her is way better.” “Way better” is also how he describes his parents’ marriage since he’s been at Boys Ranch. They are much closer now.

It wasn’t easy starting over. Afraid of being the new kid in town, Jonathan admits, “I didn’t know what to think of everybody. I thought everyone was going to bully me. But a lot of other kids were open to me, and we became friends.”

Having house parents who knew how to work with Jonathan helped turn his life around. “The Gosses helped me become a better man, more respectful.

Before coming to Boys Ranch, Jonathan was failing his classes. “I didn’t try in school. I tried to work my way out of school. I was failing a lot,” he explains. “When I came here, I learned that just because you don’t like it doesn’t mean you don’t try. I just learned to work harder and do better.”

Not only is Jonathan achieving academically, but rodeo has also given him a newfound purpose and adventure in life that he’d never known before. He says, “Rodeo is more of a ‘stick with it’ for me. When I first came here, I got hurt on one of the rodeo practices, and I wanted to quit. What it taught me was I have to learn to stick with something I want to be good at.”

Through the years, Jonathan has bloomed from being the reclusive boy to being active in team sports, playing football and basketball, along with tackling the individual challenges of cross country and track.

As a junior, he’s growing in character by focusing on FFA. “I have a pig, and animals are a responsibility, a big responsibility,” he says. Wearing the FFA blue corduroy jacket is special and makes kids like Jonathan feel like they’re a part of something significant.

For Jonathan, healing and restoration happen throughout the year, especially during the holidays. They are special times with his family, catching up, deepening relationships and making lifelong memories — all while restoring the broken pieces of their lives.

Spring breaks are for skiing with his Boys Ranch family in New Mexico. Although he grew up in the mountains, Jonathan learned to ski after he moved to Boys Ranch. “I love it,” he says.

At Boys Ranch, we don’t see young people like Jonathan as a problem needing a solution. Instead, our approach is completely different. We see the promise in him based on his strengths. Jonathan excels in math and loves working with his hands. The combination has given him a fervent interest in becoming a welder. He’s taking welding classes now and admits, “I’ve been really good at it.”

Boys and girls are allowed to experience numerous job and career opportunities while at Boys Ranch, gaining real hands-on experience in ways most students will never enjoy before graduating from high school or college. We’re intentional about building up young people in their strengths, inspiring them to succeed.

“Thank you for donating,” Jonathan says. Your generosity is helping good kids, like Jonathan, who need a second chance to thrive.

PrevSarah: You’ve Given Me So Many Opportunities
Payton: Finally, a Place Where He BelongsNext