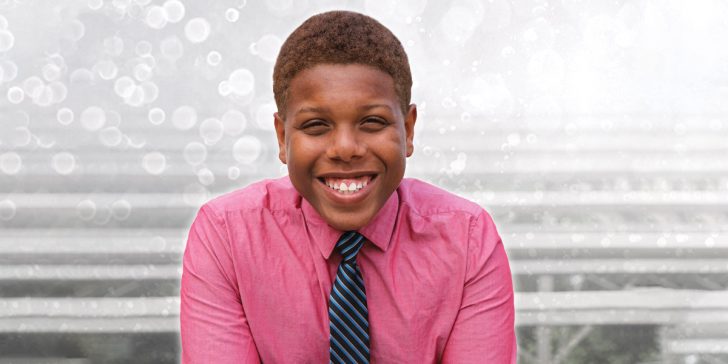 Jonathan learns what was missing in his life

As a small child, Jonathan was either moving around the country with his mother or staying in a foster home. Christmas, he said, was just another day.

“I don’t remember ever celebrating Christmas during those years before I was eight,” the now-14-year-old said.

In 2012, Jonathan was adopted. According to him, his new parents went overboard that first Christmas.

“One of my presents was a tablet (computer), I couldn’t believe it,” he recalled.

Each year since, his new family has gathered at Christmastime and showered Jonathan and his younger brother with nice things, almost as if making up for lost time.

“Christmases at home are hectic, but awesome. You know everyone is there and everyone cares about you. It’s an amazing feeling,” Jonathan said.

Jonathan’s new family is very good to him, an attitude he hasn’t always reciprocated.

“I was not exactly the best kid. I stole from my parents, I ran out, I failed school, I cussed, I tried to hang around the wrong people, did things my parents don’t even know about,” Jonathan said. “I think the reason is I just didn’t care, I was always waiting for someone to explode or hit me if I did something, and I didn’t care about school or if I got in trouble. I just did what I wanted.”

Already well into their retirement years, Jonathan’s parents struggled to deal with his antics and knew they couldn’t let him tromp any further down a dead-end road. They reached out to Boys Ranch.

When he first arrived here, Jonathan said he had a big chip on his shoulder.

“I wanted to see how far I could push these houseparents before they would hit me, yell at me or blow up,” Jonathan admitted. “But, no matter how hard I pushed, they never reacted like I expected them to and it was pretty confusing for me. This is a very unique place. I never thought a place like this existed.”

“
“I love this place and what it’s doing for me. I will never forget these people.”

Jonathan said any confusion he felt was soon replaced with inclusion. He’s made many friends at Boys Ranch. He admits to doing a lot of self-examination — and, with it, has come new spiritual growth.

“When I was small, my birth mom played Christian songs. I had a foster mom who took me to church, and I do believe there is a God,” Jonathan reflected. “My new mom encouraged me to read the Bible, but I never wanted to. For some reason, being here at Boys Ranch makes you curious, makes you want to read the Bible. I don’t know how to describe it.”

Jonathan’s horizons have expanded, too, largely through the ongoing adventure experiences, part of Cal Farley’s Model of Leadership & Service® — which recognizes adventure, purpose, power, belonging, achievement and safety as equally necessary for a person to reach their God-given potential.

“I thought rodeo was only for crazy country people,” he laughed, “But, it actually is pretty fun.”

Jonathan captured the Junior All-Around Cowboy title at this year’s 75th annual Boys Ranch Rodeo +adventureFEST. He roped a steer and then rode a steer, placing in the top three in both events, which garnered him the top title in his age bracket. Mind you, he’d never been on a horse or a steer before this summer.

“I’ve already done so many things here I never would have thought I’d do in my life,” he said.

Jonathan also hopes to have a singing part in this year’s Christmas cantata, an annual performance at Boys Ranch.

“I’ve restarted here in school and it has worked out well,” Jonathan reflected, noting his grades are better than they’ve ever been.

“Being accountable and having constant supervision has been good for me,” Jonathan said. “My folks say it is up to me how long I stay here. I know if I had to leave today, I’d cry. I love this place and what it’s doing for me. I will never forget these people.”