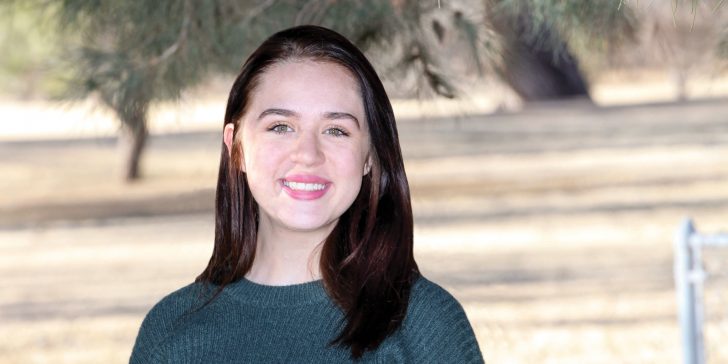 Hailey, 17, spent most of her earlier childhood trying to figure out where she belonged.

Hailey had attended 13 schools by the time she was a freshman. The frequent school moves forced her to constantly make new friends. At each different school, she sought out the ‘cool’ kids, the rebels who often ditched class.

However, her arrival at Boys Ranch in 2018 changed all that.

“God brought me out here, and at first I hated it,” Hailey admitted. “But now, I am so thankful I am here. I am the happiest I’ve been since fifth grade. I have goals, I know who I am as a person. I’m goofy, silly, optimistic, smart, straight forward, resilient, mature at times, I do know how to act. I’m coachable, and I’m open to change.”

Hailey remembered that for years, her mother often used threats of Boys Ranch to try to get her to conform.

“I remember as early as second grade my mom would tell me to clean my room and if I didn’t, she was going to call Boys Ranch and send me there,” Hailey said. “It was always a threat, a bad place. I know now she didn’t really know what Boys Ranch even was.”

Hailey realizes now that her mom’s threats were a desperate move by a then single parent.

“She had her hands extra full trying to work a full-time job and care for me and a new little brother who was born with special needs,” Hailey rationalized. “I wasn’t an easy child. I know I wasn’t.”

Her mother got married and Hailey soon had another younger sibling, plus a stepfather. Her strong personality clashed frequently with his, especially once he took on the primary role of disciplinarian. Now a pre-teen, if Hailey wasn’t in school, she was often confined to her bedroom and sometimes she was told to stay on the floor.

“I will never sleep on the floor again, and I will never eat another bologna sandwich so long as I live,” Hailey declared.

Through a series of events which involved a child-protection agency’s intervention, Hailey and her family, realized this place called Boys Ranch, would become the most viable, and best option, for Hailey.

So many positive things happened for this young woman leading up to and while in our care.

Hailey was also removed from a living situation where non-conventional discipline techniques had her feeling like she was not part of her own family. On more than one occasion, she’d been excluded from outings, gatherings of friends, and family pictures. She contends her stepdad didn’t want his social circle to know she existed.

Finally, she has been able to begin enjoying her God-given potential through the programs and therapies which are part of the Boys Ranch community.

“
This is my home now, and it will always be my home. I belong here.

Hailey finds it ironic that now she proudly calls Boys Ranch her home.

“This is my home now, and it will always be my home. I belong here,” Hailey said with deep conviction. She now understands being at Boys Ranch is a privilege, not a punishment.

Hailey has benefited from one-on-one counseling, neurofeedback, equine and group therapies, and spending time with trusted adults and positive peers. She has immersed herself in activities like cheerleading, Future Farmers of America, Family, Career and Community Leaders of America and cross-country. Her Experiential Learning Program in the community garden gives her daily opportunities to connect with animals, plants, birds and insects.

“I love Mr. Nation so much,” said Hailey, referring to her mentor, Tim Nation, a former houseparent who oversees the Boys Ranch Community Garden. “He has taught me so much.”

This relationship is very important to her. Having an adult male role model has been a very positive part of her life at Boys Ranch, an important step toward healing following a very dark time in her life. An unwelcome experience at the hands of someone she trusted had instilled a fear of men in Hailey at a very young age.

The aftermath left Hailey reeling. And, as she grew older, the painful memories led her to make some admittedly poor choices.

“I know if I hadn’t come here, I’d be pregnant or dead,” Hailey said. “That’s just where my life was going. I’m not ashamed of it. I was not on a good path.”

Hailey has learned to look to, and lean on, her faith. She lit up with conviction as she spoke of being baptized this past January at the chapel.

“I used to believe in God because someone was telling me I had to,” Hailey told, remembering times when her mom required her to sit next to her in a pew at church.

“Out here, I have come to believe in God because I know He is real and I can see what He has done in people’s lives, including mine.”

Now a junior, Hailey plans to finish her education at Boys Ranch. She contemplates going to nursing school.

“I’ve really enjoyed being at Boys Ranch and for the first time in a long time, I’m able to just be a normal kid,” Haley said. “I belong here. I’m doing well here. I’m so thankful that I am here.”