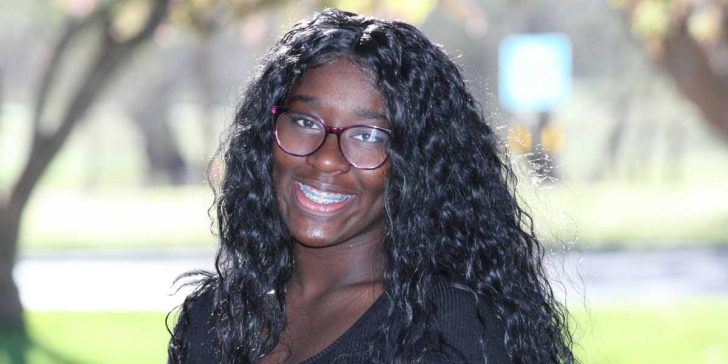 In a flowing white dress, Grace moved across the dark chapel stage lit by beautiful hues of purple and blue light. With her beautiful dance moves, some reminiscent of her childhood in the Democratic Republic of the Congo, she elegantly portrayed an angel in flight.

“Grace loves God, she loves to worship,” said her primary housemother Kelly Akers. “She can have a very powerful presence.”

This was so very apparent during her cantata performance.

“I learned to dance at church,” Grace said. “I used to dance at my church concerts, services, and special occasions. As a little kid, I even danced at people’s weddings,” she said.

Being in the spotlight is very comfortable for Grace. She considers her dancing ability to be a gift from God, a lifelong adventure she’s happy to share with the world.

“I was just glad to be able to share my gift with others on a special night,” Grace said. “I have danced onstage in front of people numerous times. It is always my pleasure.”

Grace’s earliest years were difficult. As is dictated by Congo law, her mother lived with her father’s family throughout her pregnancy. During this time, Grace’s father did not live with the rest of the family as it would be seen as bringing disgrace to the family for the two to co-exist out of wedlock.

“
I needed to find myself and learn to love myself, to not be afraid to take the opportunities given to me.

Grace was born in 2002. Her mother stayed with her about two years, when she moved to be with her grandparent.

Grace had many caretakers including grandparents, uncles and an aunt. Her father had come to the United States to pursue an education and citizenship. He promised Grace he would bring her to America.

When Grace was born, the DRC was ending a bitter civil war. Continued conflict between rebel groups meant Grace experienced and saw things no child should. The adults in her life came and went. Discipline was harsh. Grace took on the role of caretaker for ailing relatives.

At age 12, when Grace’s visa came through, she moved to the U.S. to be with her father and his wife.

At first, it seemed life would be good for Grace. However, the lack of attachment to her parents, the losses she’d experienced, a language barrier and a new culture proved to be too much.

Grace knew just enough English to discern whether she was being made fun of at school. When she had the option to fight or flee, she always chose to fight. Not knowing how to control her impulses, and despite her brave appearance, Grace was depressed and full of fear.

Grace was able to attend church services and vacation Bible school. She had declared her faith at age 11, and it was this faith that kept her going. Sadly, Grace was just surviving, not thriving. Her father, though, realized she needed more than he could give her.

Since arriving in our therapeutic community, trusted adults have come into her life, doing what they said they would do, advocating for the things she needed and caring for her every need. She’s started a uniquely personal adventure, creating lasting, meaningful relationships with houseparents, counselors, teachers and the chapel staff.

With the help of many, Grace learned English, which increased her sense of belonging and power. Better command of her new language helped her interact properly with mentors and friends.

“I have faced my fears and tried many new things” Grace said, smiling. “I started playing sports … it actually has been the best thing I have ever done.”

She has run cross-country, played basketball and tennis. She is a member of Fellowship of Christian Athletes and choir. And, Grace has learned life skills in the Experiential Learning Program, where she worked in the dining hall.

Having just graduated in May, Grace plans to go to college and wants to study criminal justice.

Looking ahead to Grace’s transition, Akers said she will miss Grace.

“She definitely came out of her shell while she was here. If she is your friend, she is a fierce one,” Akers recalled. “Grace will add a lot of laughter to any situation. She truly wants to be a leader. She draws others in to participate. She knows how to create fun. I know Grace will do awesome wherever she goes from here.”

Grace said her Boys Ranch memories will include a lot of love and support.

“I needed to find myself and learn to love myself, to not be afraid to take the opportunities given to me. That happened here,” she said. “This place will always be in my heart.”