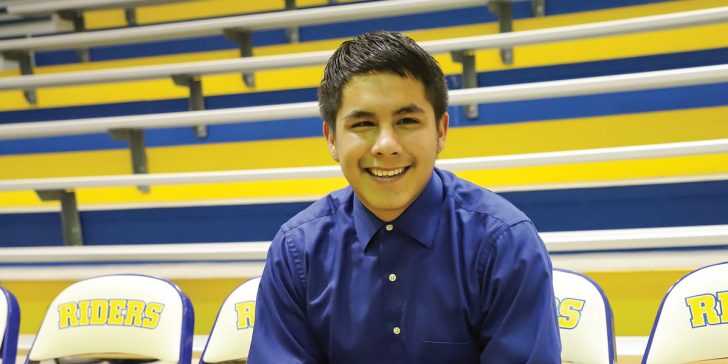 Elvis sees events come together for his benefit

Arriving at Boys Ranch is just one of many times when Elvis felt Someone far greater was interceding on his behalf. He believes he’s witnessed over and over the ways in which the perfect people have come into his life at the right time to make perfect things happen on his behalf.

It was 2017 when Elvis and his twin brother, Angel, both 15, came to Boys Ranch. Originally from Lubbock, Texas, the two had arrived in nearby Amarillo via San Antonio, where they had just spent the allowed maximum of 90 days in an emergency shelter. In Amarillo, they were put in another emergency shelter with a 90-day limit.

Elvis said he met some very good, loving people during that time.

“They all treated us like we were their own,” he recalled. “There are some really great people out there and a lot of love out there and we experienced that. When we got to Amarillo, the people there told us about Boys Ranch. They brought us out here to interview and let us see the kind of room we would have if admitted.”

Like many of our children, Elvis spent the first few months in a transition home at Boys Ranch, testing limits, acting out and misbehaving.

“I was using bad language and running out and I didn’t think anyone cared about me,” Elvis said. “Then, they moved me into Henry Home, and everything started changing for me. The Holcombs, who were my houseparents there first, were so good with me and it was they who really taught me God is amazing.”

Elvis was doubly blessed when the Holcombs were succeeded by Rocky and Amy Lawless.

“The Lawlesses have made me understand that God is doing things in my life all of the time. They’ve shown me I’m way better than I was acting, and they told me I could be a leader.” Elvis recalled. “I’d honestly never even thought about that until they said it.”

The Lawlesses weren’t the only ones who could see Elvis’ potential. Jennifer Mott, the assistant principal at Boys Ranch High School, did as well.

Additionally, Elvis has immersed himself in the Boys Ranch community as part of the athletic training staff for football. He’s played football, managed baseball, track and basketball, served on the chapel’s video crew, helped with the chapel’s middle school “Radicle” program, competed in culinary arts contests and served as vice president of Boys Ranch High School’s chapter of Family, Career and Community Leaders of America.

“Elvis has grown into one of the most loving guys,” said George Lawless, his housefather. “He will do just about anything for anyone in need. I’ve seen him clean up after someone else, carry a player that was injured and do so many things for people when he didn’t have to. He’s a true servant and has a huge heart. He has also grown in his faith and I can’t wait to see what God has in store for him.”

Elvis took advantage of opportunities as they were presented to him and it was not always easy.

Elvis had a vision problem when he arrived at Boys Ranch. As a toddler, he developed both estropia and hyperopia, which causes, among other things, wandering eyes. He’d been teased and bullied because of it.

“Boys Ranch had me evaluated by a specialist and found that through special therapy, my eyes could be different,” Elvis said. “They told me they were going to get me help for my eyes.”

Money from a special medical fund was used to put Elvis in weekly vision therapy, something he continues to benefit from today. This medical fund partners Boys Ranch with a pair of private organizations to raise dollars for medical needs not covered by our children’s insurance.

“My confidence has been so boosted!” Elvis exclaimed. “I used to be ashamed because I couldn’t look someone in the eye.”

This newfound confidence has helped Elvis share his story with others. He recently gave his testimony during a special gathering he attended. He now has no problem being in front of a group and sharing how God has worked in his young life.

“I want to turn my life totally over to God because He has done so much for me,” said Elvis, who plans to be baptized this spring.

“I want to choose a date that I know my mom and Angel and some other relatives can attend,” Elvis said. “That’s important to me and my relationship with them.”

Elvis plans to graduate from Boys Ranch in May. He will attend South Plains College in Levelland, Texas, for his first two years, majoring in criminal justice.

“If anyone asks me where I’m from, I will say Boys Ranch,” Elvis said. “I love this place. It is my home and there are so many people here who have shown me how much they care for me.”

Elvis said he will leave Boys Ranch with his better vision, relationships to last the rest of his life, confidence to lead others, a new appreciation for respect, honesty and love.

“I know this is a place where I will always belong,” Elvis concluded, “and I’m so much better for it.”

← Hailey: Boys Ranch is a privilege
William: I’m part of a huge family →