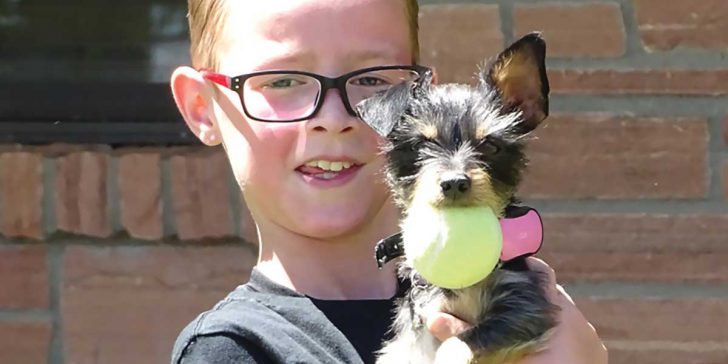 Chase grins as he holds open the big glass door to the Simpson Dining Hall at Cal Farley’s Boys Ranch. A stream of hungry people strolls through. Some are his classmates, others are staff and teachers, some are visiting adults.

Tall for his age, Chase waves his gangly arm, directing the foot traffic. He says hello to everyone. People thank him for his polite gesture. Soon the rush is over, and he closes the door and falls back in line with his fourth-grade class at Mimi Farley Elementary School.

There was a time when the last thing Chase would have wanted to do was hold a door open for others. However, his time at Boys Ranch has helped him find the kindness buried within.

In the 15 months he has been here, Chase has become a happier child. Through a plan of service designed to increase his self-awareness and self-control, he’s learning to practice age-appropriate social skills and master home and school expectations. Most of all, Chase is forming respectful, trusting relationships with a supportive group of peers and adults.

“We have seen great progress in Chase,” said Andrew Crotser, Chase’s former primary houseparent. “He has opened up to all of us in a way we never thought he would. I spent a lot of time with him doing things outside, which we both love. And we talk. Nine times out of 10, he will talk about his home life. I don’t bring it up. He just talks about it.”

For Chase, like many of his peers, the best therapy sometimes is to just be able to talk and be heard.

“
I’m more comfortable with myself, which helps me make friends.

Born to a single mom who struggled with drug addiction, the first family to foster Chase lovingly adopted him and he joined their family.

Despite their best efforts to give him a life of opportunity and love, Chase wasn’t able to reciprocate. With each new year, he became increasingly mean-spirited, manipulative, disrespectful and deceitful. He used bad behavior at home to claim what he perceived as the sense of power and achievement he so craved. The more he did this, of course, the less belonging and safety he felt.

While his relationship with his father was better, his conflicts with his mother were especially difficult. His parents were not equipped to give Chase the help he needed. They sought help through many resources, but nothing seemed to help. Overwhelmed and out of ideas, they reached out to Boys Ranch.

“Since being at Boys Ranch, I have learned I need to be nice to people … Before coming here, I had a bad attitude,” Chase admitted. “I personally feel I am better with that. I am more comfortable with myself, which helps me make friends.”

In being more comfortable with himself, Chase also has learned he’s a gifted young athlete.

“I learned that I like sports a lot, and that’s fun,” the 10-year-old said. “I would really like to be an NFL player and because of that, I run a lot. I do a lot of laps around my (Boys Ranch pre-adolescent) community. If that doesn’t work, I can be a manager at McDonalds,” he laughed.

Chase has even received a physical education award in school, one of his biggest achievements so far.

“My proudest moment was when we won flag football with Mr. Fishburn as our coach,” Chase said.

“In the beginning, he would be too afraid to give it his all,” Fishburn said. “Now, he has great sportsmanship and goes above and beyond for his team. He’s so good at encouraging his teammates and he’s a good athlete. He is respectful and really does his best to follow directions and the schedule of the home.”

Whether he’s on or off the field, Chase works every day to form respectful, trusting relationships with a supportive group of peers and adults at Boys Ranch through consistent communication and routines.

“I really like the Crotsers and the Fishburns,” Chase said. “They are nice, they love me, and we get to enjoy activities outside together. I really like Mr. Fishburn playing sports with me. Mrs. Fishburn always checks on us at night, and I like that.”

Naturally, the hope is that Chase will be able to apply all he learns at Boys Ranch to his relationship with his family. Reunification is almost always the preferred end goal for the children we serve.

For now, Chase wants to stay at Boys Ranch as long as he can, as it really feels like home to him. He already feels equipped to have a better relationship with his parents.

“The Crotsers and the Fishburns have put a lot of time into helping me change, so I thank them for loving me enough to help me grow.” Chase said.