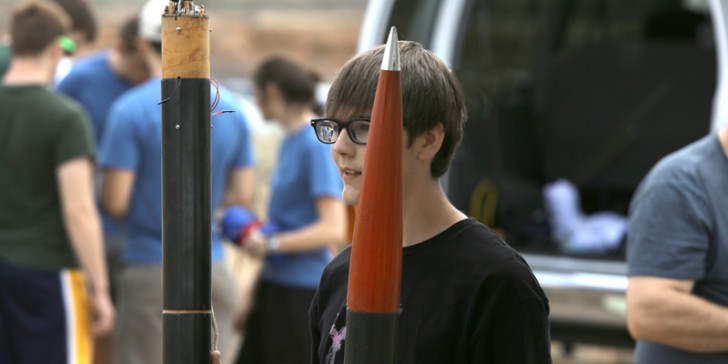 BOYS RANCH, TEXAS – Members of the Boys Ranch Rocketry Club, the Panhandle of Texas Rocketry Society and students from the University of Missouri’s Advanced Aero Vehicle Group will gather April 11 at Cal Farley’s flagship campus for a series of rocket launches, culminating in a pair of high-powered send-offs that could exceed 23,000 feet in altitude, said Cal Farley’s Emerging Technology Coordinator Barre Wheatley.

The rocketry club is part of the Community-as-Lab program, which teams trained Cal Farley’s staff with residents to explore their unique interests and apply real-world experience to concepts learned in the classroom, said Mark Strother, Cal Farley’s executive vice president.

“Community-as-Lab is an effort to use the whole community as a learning lab for the youth,” Strother said. “One of residents’ main motivators in school is when they see the application in the real world. Getting residents involved in all of these things can motivate them back in their math, science, history or writing classes.”

Wheatley said AAVG approached Cal Farley’s because the organization is one of only five launch sites in the United States with a 40,000-foot or greater altitude-restriction waiver from the Federal Aviation Administration.

“We have had our FAA waiver for two-and-a-half years,” Wheatley said. “This year, we were approved for an increase in altitude from the original 18,000 feet to our current 40,000-foot waiver. This will allow our residents to begin testing high-altitude single- and two-stage rockets.”

The April launches, the first of the year at Boys Ranch, will include a 92-inch, 6.5-pound carbon fiber rocket called “DERK,” after the initials of its resident builders, who range in age from 11 to 16. DERK has a three-inch diameter and will use a five-grain M rocket motor, which can produce up to 2,300 pounds of force, to achieve an altitude of more than 20,000 feet. The second notable flight of the day will be led by the Missouri team. It will launch a two-stage, 80-pound rocket using a single M motor for each stage in preparation for a June rocketry competition. AAVG expects its vehicle to achieve approximately 23,000 feet in altitude. Electronic gear aboard each nose cone will record data including maximum altitude.

Launches will begin about 9 a.m. and continue through 4 p.m. The two large-scale launches will occur when Wheatley’s team determines conditions are best.